Sales estimates for the legal cannabis industry over the next two years are “far too aggressive” and could lead to significant stock declines, according to CIBC analysts.

CIBC analyst John Zamparo published a note to clients on Tuesday stating that consensus estimates for revenue and adjusted earnings from other cannabis analysts are “unachievable,” throwing cold water on the lofty sales estimates that have buoyed the nascent marijuana sector since it was legalized in Canada last year.

Cannabis companies have seen a significant decline in stock valuations over the past year since cannabis was legalized in Canada last October amid several issues in the industry, notably a shaky rollout of retail stores, supply chain problems, and regulatory miscues. Stock price reaction to recent quarterly results from top cannabis producers including Canopy Growth Corp. and Aurora Cannabis Inc. has also demonstrated that cannabis investors are unwilling to tolerate results that significantly miss forecasts. 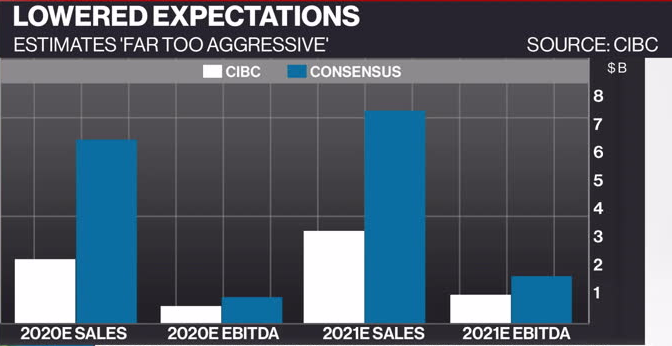 He also expects cannabis producers to report $550 million in earnings before interest, tax, depreciation and amortization (EBITDA) next year, growing to $975 million in 2021. The consensus total EBITDA estimate for 2020 is $900 million, and $1.6 billion for 2021.

“It’s a fair observation that consensus estimates include international revenues, whereas our estimates do not. But the point remains that for many stocks — mostly outside our coverage universe — expectations are incredibly aggressive,” Zampano wrote in his report.

He adds that stock values could be significantly impacted as poor revenue figures from smaller cannabis producers have been observed to negatively impact the larger and stronger players. That could further deteriorate into some cannabis producers suspending their operations or even selling their businesses at a steep discount, he added

“Those without strong enough balance sheets to get through what could be an elongated sales ramp, or without a differentiated strategy, could see operations halted or have their businesses bought for pennies on the dollar,” Zampano said.