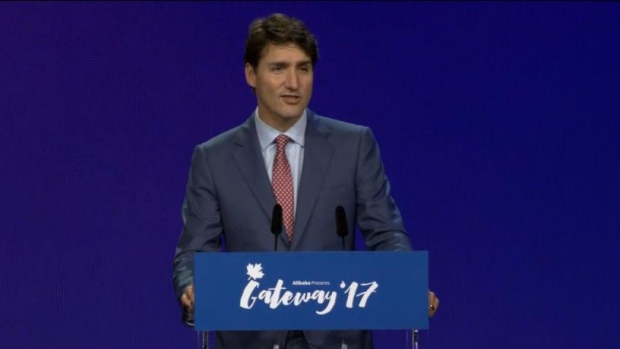 TORONTO -- Prime Minister Justin Trudeau is playing up China's potential as a market for Canadian products, touting the benefits of globalization and free trade amid the backdrop of Ottawa's turn hosting the latest round of NAFTA renegotiation talks.

Trudeau urged Canadian small- and medium-sized businesses to explore the US$5 trillion retail opportunity in China at a conference Monday hosted by Chinese e-Commerce giant Alibaba. Canadian businesses, he said, should focus on opportunities outside their border to stoke trade relationships with global "neighbours."

"So much of the world is looking inwards, closing off, going protectionist every now and then," Trudeau said during a fireside chat.

"Canada remains open and optimistic about the role we can play in the world."

"In the future there will not be made in Canada, made in America, made in China. Most of the products will be made in the internet," he said.

"You have 1.5 million Chinese community (in Canada)... these are the ambassadors of your products."

The event took place the same day Ottawa played host to a third round of talks with the U.S. and Mexico to replace the 23-year-old North American Free Trade Agreement. The U.S. has called for an overhaul that would ensure more production in the U.S. and dramatically change its trade relationship with its closest neighbours.

Canada's chief NAFTA negotiator said Monday that solid progress is being made at the NAFTA talks, but it's too soon to tell if a deal can be reached by the year-end deadline set by the United States.

U.S. President Donald Trump has criticized China's large trade surpluses with the United States and threatened to raise tariffs on steel. He has ordered an investigation into whether Beijing improperly pressures companies to hand over technology in exchange for market access.

Alibaba is hosting the conference to pitch Canadian businesses on the benefits of accessing the growing middle class in China and the approximately half a billion active consumers that use its e-commerce platform annually.

Alibaba says 3,600 Canadian companies signed up to attend the event and the conference had politicians from all three levels of government in attendance, including the Prime Minster, Ontario premier Kathleen Wynne and Toronto mayor John Tory.

Alibaba hosted a similar U.S.-focused event in Detroit in June as it actively expands outside China.