Canadian consumer confidence rebounded in December from a two-month slide, as financial markets surged at the end of last year and sentiment around real estate jumped to the strongest since 2017.

The Bloomberg Nanos Canadian Confidence Index, a composite gauge based on weekly telephone polling, ended the year at 56.5, closer to historical averages and up sharply from a November reading of 54.8 that was the lowest in 10 months.

The pick-up in consumer sentiment suggests the nation’s economy will start 2020 on a better footing after a poor showing to end 2019. Canada has posted a string of poor results — including weak retail spending — indicating the economy barely eked out growth beyond one per cent on an annualized basis in the fourth quarter. Yet, most economists expect somewhat better numbers in the first six months of this year, with growth forecast at 1.4 per cent in the first quarter.

Every week, Nanos Research calls 250 Canadians for their views on personal finances, job security and their outlook for both the economy and real estate prices. Bloomberg publishes four-week rolling averages of the 1,000 telephone responses.

More Canadians said their personal finances and job security have improved over the past month. Households are also more confident about the value of real estate, with 45 per cent of Canadians predicting home values will rise. That’s the highest month-end reading for that question since April 2017 and is consistent with a recent rebound in housing markets nationally.

Canadians, however, remain downbeat about the outlook for the economy, with less than 15 per cent of respondents saying the next six months will bring a stronger economy.

Even with the slump in confidence in October and November — which coincided with a divisive federal election — the data show Canadians are heading into 2020 more confident than at the start of last year, when the global economy was reeling from financial market turmoil at the end of 2018.

Compared with the start of 2019, there is now more certainty around the ratification of the new North American free trade agreement, a relatively more tranquil political environment in Canada than elsewhere and a stabilization of interest rates, according to Nik Nanos, chairman of Nanos Research.

The most recent survey results continue to suggest sentiment is divided across the country. Quebeckers lead the charts with the highest confidence, while sentiment in the energy-rich prairies region lags. 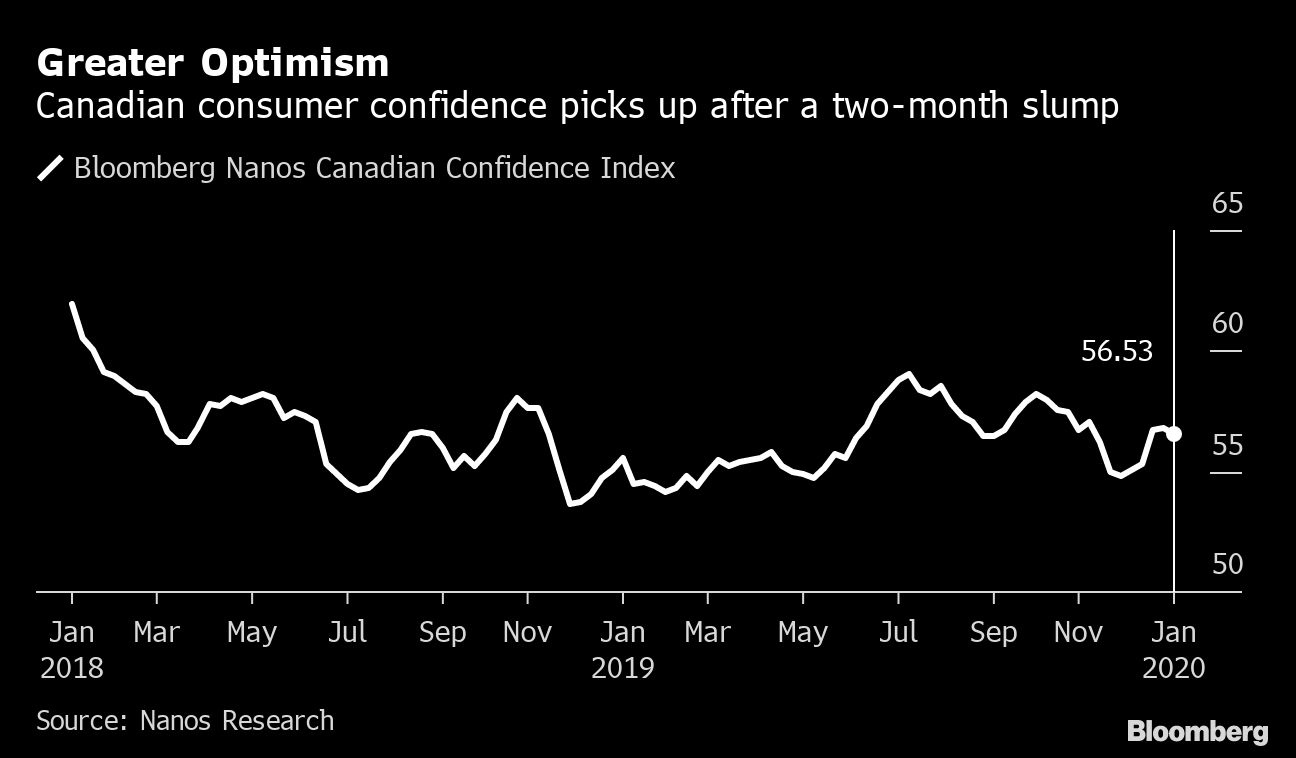 • In the final week of 2019, 18.2 per cent of Canadians said their personal finances had improved over the past year, up from 14.8 per cent at the end of November

• After slumping in November, job security levels picked up in December, with 66.7 per cent of Canadians describing their employment as at least somewhat secure

• While still recording the lowest confidence levels in Canada, households in the prairie provinces posted a small uptick in sentiment last month