Consumer prices in Canada climbed at the fastest rate in a decade, outpacing estimates and potentially fueling concerns that the country -- much of which is still in lockdown -- is entering a period of persistent inflation.

Annual inflation accelerated to 3.4 per cent in April, compared with 2.2 per cent in March, Statistics Canada reported Wednesday in Ottawa. That exceeded economist predictions of a 3.2 per cent annual pace. On a monthly basis, inflation rose 0.5 per cent versus the 0.2 per cent economists were expecting. 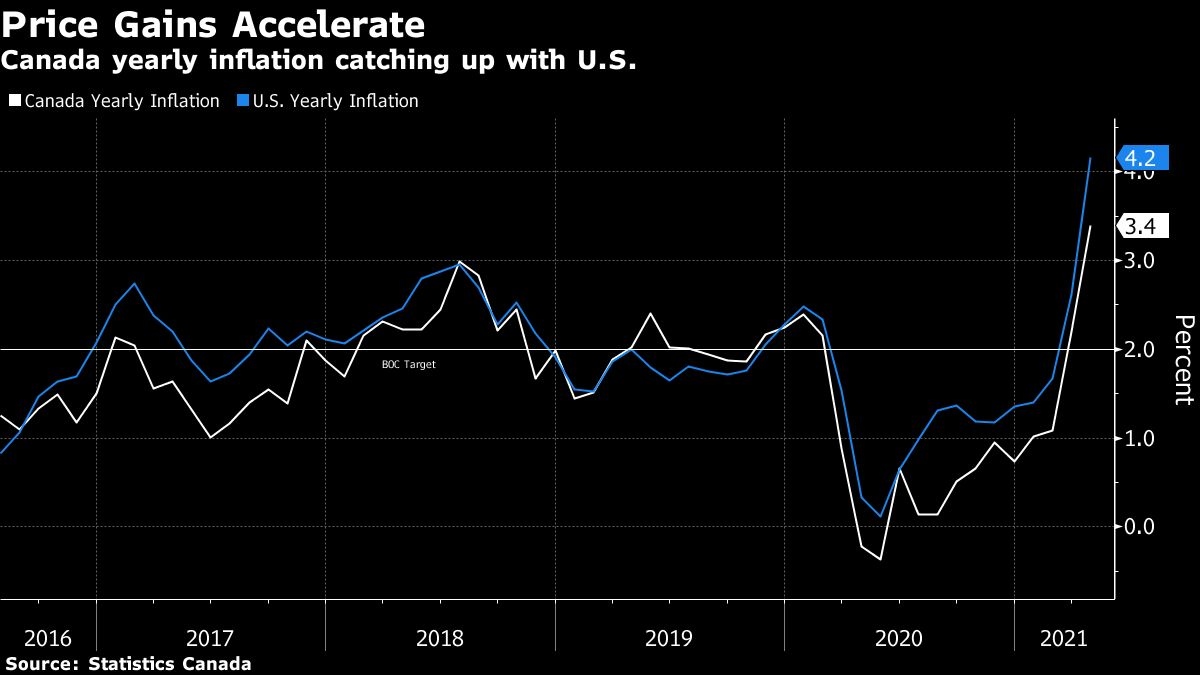 The annual reading -- the highest since May 2011 -- may raise worries that price pressures could be stronger than predicted by the Bank of Canada, which has been cautioning against over-reacting to an inflation spike it expects will be only transitory. If inflation proves more durable, however, that could force the central bank to bring forward interest rate increases that investors aren’t anticipating until later next year.

Core inflation -- often seen as a better measure of underlying price pressures -- rose to 2.1 per cent from 1.9 per cent in March. That’s the highest since 2012.

Higher gasoline prices were the biggest upward contributer to annual inflation. They were up 62.5 per cent in April compared with the same time last year, when prices plunged to an 11-year low in the early weeks of the pandemic, the report said. On a monthly basis, shelter prices were the biggest upward contributer due to higher building costs and strong demand for single family homes.

The annual consumer price index reading is distorted because the year-ago period used as comparison coincided with broad demand and price declines at the beginning of the Covid-19 pandemic, a phenomenon known as the base effect.

“Until the Bank of Canada sees labor market slack largely closed, and consumer wage and inflation expectations show signs of breaking out of a lengthy drift lower, we think policy makers will move very carefully in the direction of a rate hike.”

A similar phenomenon also drove inflation higher in the U.S. last month to an annual 4.2 per cent pace. Unlike in the U.S., inflation in Canada may be rising at a slower pace because much of the country was still in some form of a Covid-related shutdown last month, stunting demand for goods and services. Recent gains in the Canadian dollar also may have dampened inflation pressures.

“Base effects and higher commodity prices have done most of the damage, similar to what was seen in the U.S. CPI release last week, although that also had a boost from the US economic reopening,” Simon Harvey, a senior foreign exchange analyst at Monex Canada, said by email.

Canada’s dollar fell after the report, trading 0.3 per cent lower at $1.2101 per U.S. dollar at 9:01 a.m. in Toronto trading. Yields on Canadian government five-year bonds were little changed at 0.95 per cent.

Bank of Canada Governor Tiff Macklem had predicted that inflation would rise to about 3 per cent because of these base effects, but he also said he believes that underlying price pressures remain depressed because of continued slack in the economy. In its latest forecasts released last month, the central bank forecast inflation to average 2.9 per cent in the second quarter before returning near its 2 per cent target by the end of the year.

“BoC members have already stated that they’d look through the short-term overshoot in inflation, meaning there is a high bar for CPI to clear before markets start to speculate on changing expectations of normalization,” Harvey said.