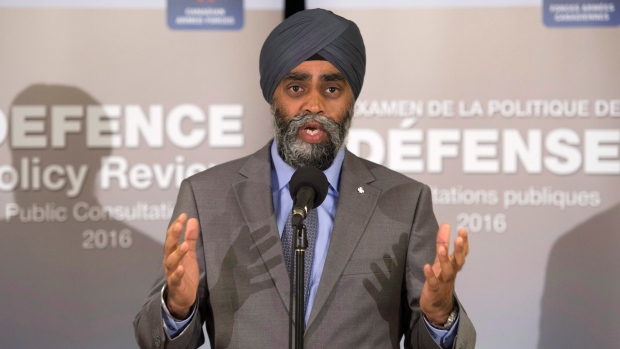 OTTAWA -- Canada's defence minister is calling out China over what he describes as its "hostage diplomacy" and says the NATO military alliance needs to keep tabs on the increasingly assertive Asian giant.

The two Michaels were arrested in apparent retaliation for Canadian authorities' having detained Huawei executive Meng Wanzhou in Vancouver in December 2018 to face fraud charges in the United States.

Sajjan said China's arrest of the two Canadians violates international rules and norms, and that Canada is thankful that its allies have supported Ottawa's calls for Beijing to release the two men.

The minister added that while Canada and China have strong trade ties in some areas, there are concerns about China's actions in the South China Sea and other security-related areas.

Sajjan said NATO needs to both watch China and continue to present a unified front against it and other potential adversaries to deter hostile action.