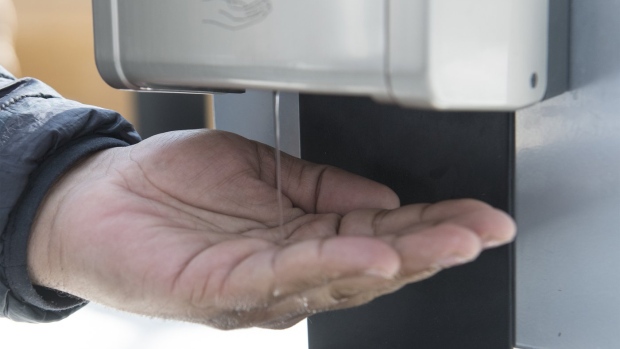 A man dispenses hand sanitizer in a shopping mall in the Montreal borough of Pointe-Claire, Saturday, March 14, 2020. For many distilleries that pivoted their operations and began making hand sanitizer two years ago amid a surge in demand for the disinfectant product in the early days of the COVID-19 pandemic, they have completely stopped and are no longer including it as a part of their business. , THE CANADIAN PRESS/Graham Hughes

Many distilleries and breweries that pivoted their operations to make hand sanitizer in the early days of COVID-19 have since walked away from this side business.

Health Canada granted temporary authorization to companies with the capabilities to manufacture hand sanitizers when the pandemic hit and the skin disinfectant was flying off shelves.

Calgary-based Annex Ale Project brewery was one of the early businesses to make the pivot because of initial demand but co-owner Andrew Bullied said in an interview that the transition was "a very difficult, taxing process."

Like many businesses, Annex Ale Project closed its tap room for in-house consumption when restrictions and lockdowns kicked in. With revenue falling, Bullied and his team joined forced with Two River Distillery and Raft Beer Labs to start making hand sanitizer, selling them at their location and to retailers.

Bullied cited the costs associated with putting everything together, including packaging, as one of the main challenges.

Although they were able to "generate a return" very quickly, initial profits soon dissipated along with sales as global producers of hand sanitizer ramped up production and the understanding of how COVID-19 spreads evolved, he explained.

Annex Ale Project decided on their own to stop producing hand sanitizer completely in late 2021.

Bullied said that it "wasn’t fun enough" to continue doing anymore, but notes that it was "interesting" to be able to see how local manufacturing could "step up" and modify their processes.

Ironworks Distillery in Lunenburg, N.S. produced hand sanitizer from March 2020 to September 2020, only a few months.

"It made no sense at all for us to compete against major manufacturers who had the economies of scale on their side," Ironworks Distillery co-owner Lynne MacKay said in an interview. "Our costs for making sanitizer were never going to be easily recouped."

It's not only the small businesses that jumped on board, with Labatt Breweries of Canada among other producers.

Labatt produced and distributed 100,000 bottles of hand sanitizer, but is no longer making it, the company said in a statement.

In British Columbia, distilleries and breweries that are still producing hand sanitizer have been ordered by the provincial government to cease production by May 8.