The Canadian dollar has done enormously well so far this year: Currency analyst

Foreign-exchange markets took a risk-averse turn Thursday, sending the Canadian dollar to its weakest against the greenback in almost two years and Australia’s currency close to the lowest since the early months of the Covid pandemic.

The US dollar-loonie pair rose as much as 0.6 per cent to 1.3240, topping the mid-July level of 1.3224 that had been the highest since November 2020. The milestone comes amid a broad-based surge that’s seen the greenback hit multiyear peaks against most of its major peers in recent weeks. The Aussie slid 0.8 per cent to a low of US$0.6696 Thursday, close to the US$0.6682 level it reached in July that was the weakest since the first half of 2020. 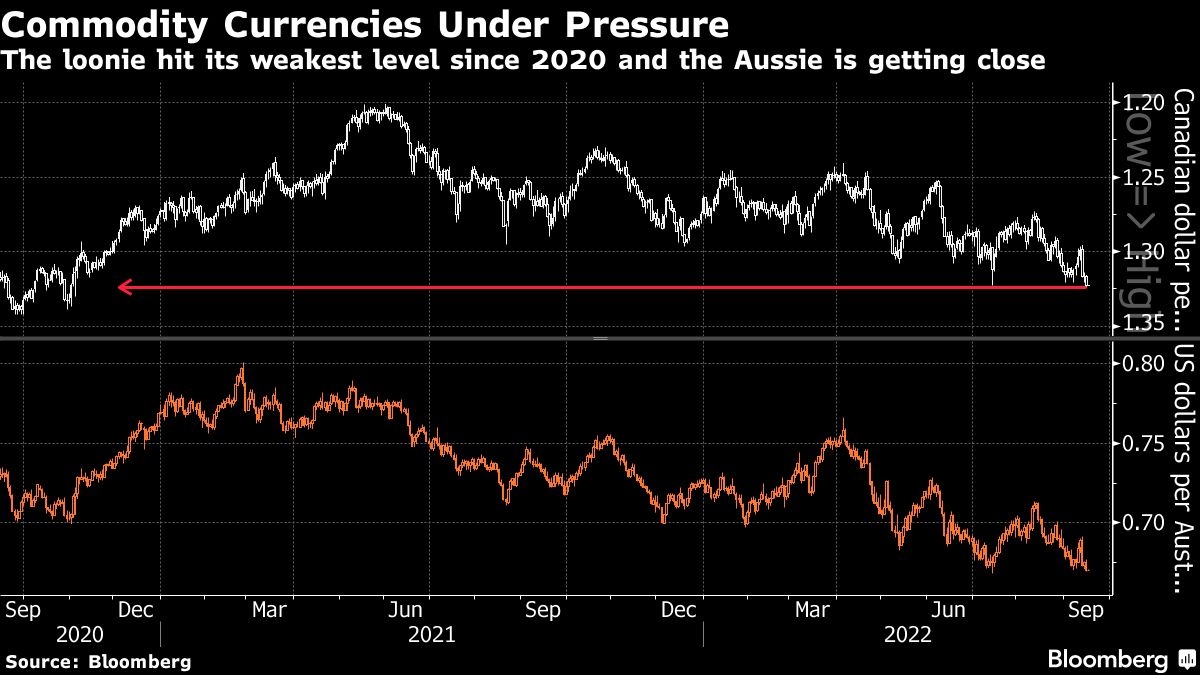 The new lows come ahead of a widely anticipated Federal Reserve meeting next week, with greenback gaining versus most its Group-of-10 peers aside from the Swiss franc, euro and Danish krone Thursday. The dollar strengthened as Treasury yields climbed ahead of next week’s Federal Reserve meeting. The policy-sensitive two-year rate was up as much as eight basis points at 3.87 per cent, the highest since 2007, deepening the curve inversion.

US yields have jumped this week after hotter-than-expected consumer inflation data spurred traders to ramp up bets on the Fed hiking rates. Traders are now pricing in the fed funds rate to peak at close to 4.5 per cent next year, from the current range of 2.25 per cent and 2.5 per cent.

“This is what you’d expect if terminal rates are rising,” said Bipan Rai, head of foreign-exchange strategy at Canadian Imperial Bank of Commerce. “The demand backdrop looks compromised and commodities are also under pressure,” thus pulling on resource-related currencies such as the Australian and Canadian dollars.

Despite a decline of more than 4 per cent this year against its American counterpart, the Canadian dollar remains one of the best-performing developed-market currencies in 2022. The country’s economy has been helped by higher prices for commodities and energy and a scaling back of Covid restrictions, with growth actually accelerating in the second quarter even as global recessionary concerns mounted. The Aussie is also holding up better in 2022 than the majority of G-10 peers, with the yen, pound and euro all absorbing more losses.

“Everything FX pivots around rates, stocks and risk appetite at the moment,” said Shaun Osborne, chief foreign-exchange strategist at Scotiabank in Toronto. “Correlations ebb and flow over time but it’s hard to say when this pattern of trade will cease. My guess is that risk appetite will remain the driver for FX for some time - until perhaps there is more clarity on Fed policy.”