The loonie will outperform versus the Euro and British pound sterling: Currency analyst

Canada’s dollar surged after the nation’s central bank delivered a bigger-than-expected interest-rate hike, catapulting it ahead of major developed-market peers on the path toward tighter monetary policy.

The so-called loonie climbed against all of its Group-of-10 peers, advancing as much as 0.7 per cent against its US counterpart to $1.2937 per greenback. Short-end Canadian rates leaped after the Bank of Canada shocked traders with a 100-basis-point move in its benchmark rate, extending an earlier advance fueled by hotter-than-anticipated US inflation figures. The two-year bond yield rose as much as 19 basis points to 3.4 per cent.

The aggressive pace of tightening cements the Canadian dollar’s position as one of the best-performing major currencies right now. While the mighty greenback has climbed against almost everything this month, the Canadian dollar is up against all of its other Group-of-10 peers since the end of June.

The actions of the BOC “will really help shield the loonie from further downside pressures stemming from commodity and equity benchmarks,” said Simon Harvey, an analyst at Monex Europe Ltd. The dollar-loonie pair has struggled to make inroads above 1.3, and he thinks this dynamic “will persist over the coming weeks.” 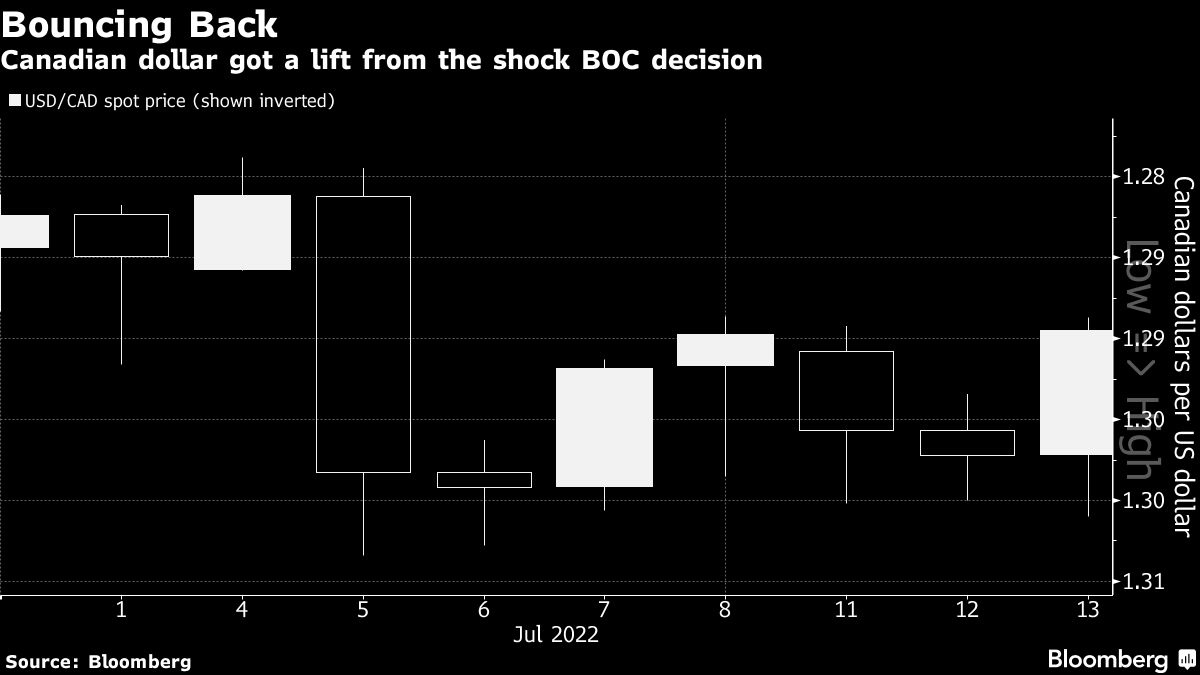 BOC boss Tiff Macklem raised the central bank’s policy rate to 2.5 per cent in a decision announced Wednesday in Ottawa that warned of more hikes to come. The 100-basis-point move is the biggest increase since 1998 and larger than the three-quarter-point move that economists and markets had been primed for.

The decision came after consumer-price inflation numbers from the US added fuel to bets that the Federal Reserve is also likely to be firm in its hawkishness, with traders jacking up bets on the prospect that the US central bank might also lift by 100 basis points this month.

Equally hawkish Fed and BOC outlooks do mean that the Canadian dollar may not make much headway against the dollar even with large hikes from the Ottawa-based central bank, but its outperformance should be firmly felt against other currencies such as the yen and euro, according to Scotiabank’s Juan Manuel Herrera Betancourt.

Bipan Rai, a strategist at Canadian Imperial Bank of Commerce, likewise said that the loonie remains well positioned to do well against non-US currencies, but sees downside risks for it against the greenback.