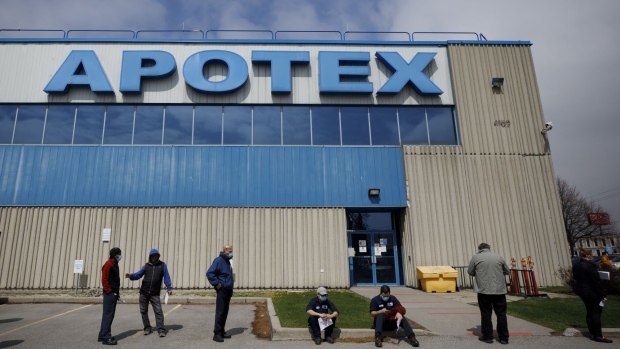 Workers wearing protective masks wait to receive doses of the Moderna Inc. Covid-19 vaccine from Humber River Hospital's mobile vaccination clinic at the Apotex Inc. pharmaceutical facility in Toronto, Ontario, Canada, on Tuesday, April 13, 2021. For the first time since the pandemic began, Canada has passed a grim milestone, with more new Covid-19 cases per capita than the U.S. , Bloomberg

Apotex Inc., a generic-drugmaker whose billionaire founder was mysteriously murdered in 2017, is exploring a sale that could value the Canadian company at several billion dollars, according to people with knowledge of the matter.

The closely held company is working with an adviser to field interest, reviving a 2019 review of strategic options, said the people, who asked not to be identified because the deliberations are private. Apotex generates about US$400 million in annual earnings before interest, taxes, depreciation and amortization, the people said.

Sale considerations are preliminary and no final decision has been made, the people said. A representative for Apotex didn’t immediately have a comment.

The potential sale comes amid a bout of potential deal activity in the generic drug space. Last month, Novartis AG said it might spin off or sell its Sandoz generic-drug unit after it consistently failed to meet expectations due to eroding prices and tough competition. Other big drugmakers such as Pfizer Inc. have also taken steps to move generic drugs off their balance sheets.

Apotex is controlled by the family of late founder and chief executive officer Barry Sherman, who was found dead along with his wife in their Toronto mansion. The double homicide remains unsolved.

Founded in 1974, Apotex is the biggest maker of generic drugs in Canada and employs about 8,000 people globally, operating in more than 45 countries including Canada, the U.S., Mexico and India, according to its website.

The company agreed to pay US$49 million to resolve allegations that it conspired to fix the price of a generic cholesterol drug, the Justice Department said in October.