Spending in Toronto’s downtown core still 40% below where it was pre-pandemic: Jan De Silva

Canada’s economy returned to growth as consumers headed back to restaurants and entertainment venues, propelling spending on services.

Gross domestic product rose 0.7 per cent in August, Statistics Canada said in a flash estimate from Ottawa. That’s a reversal from July, which showed a 0.1 per cent contraction, according to the report.

Economists were predicting a 0.2 per cent drop in output for July, after early guidance indicating a weak start to the second half of the year. The agriculture and manufacturing sectors were among the contributors to the decline. 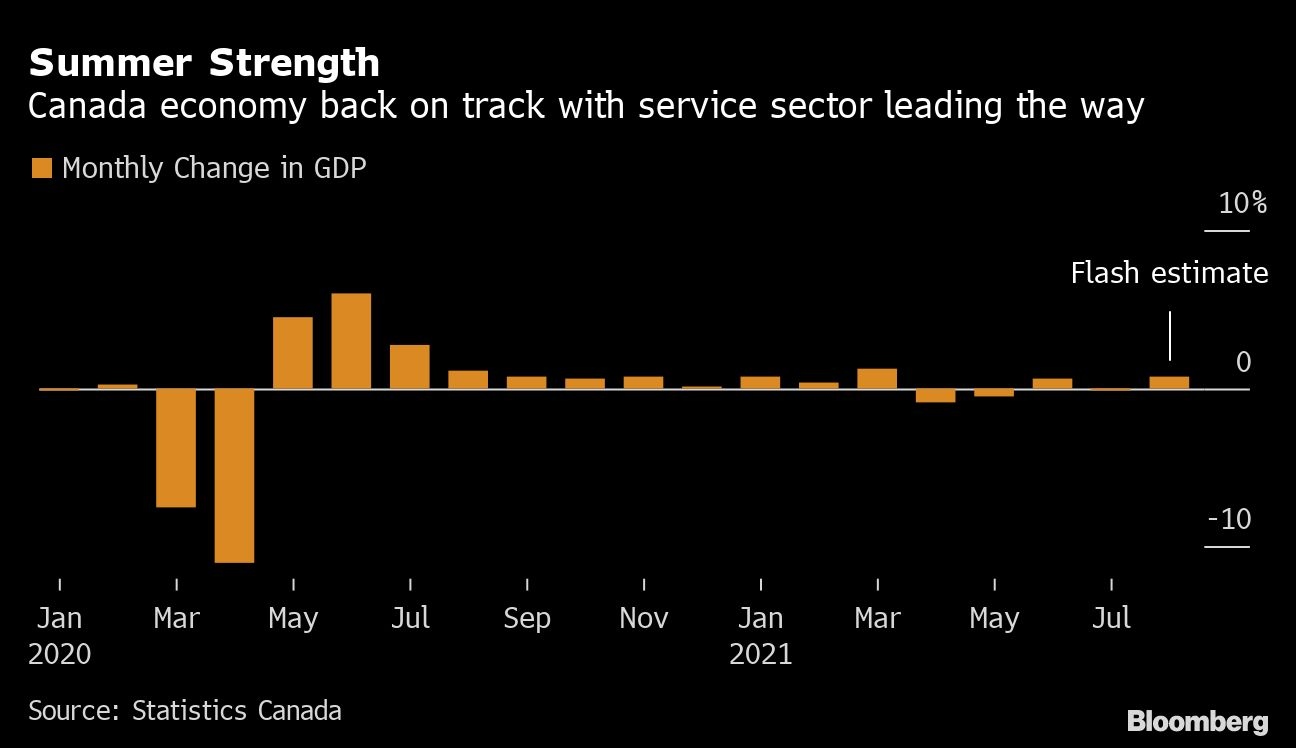 “Today’s GDP report provides a small tonic to the troubling results from a month ago,” Doug Porter, chief economist at Bank of Montreal, said in a report to investors. “The slightly smaller-than-expected setback in July and nice pop in August suggest that the economy managed to grind out some moderate growth in the summer quarter as a whole.”

The August figure suggests Canada’s economic recovery is back on track, with consumers leading the way as businesses reopened amid a strong vaccine rollout in the early summer months. While a cool-down in the housing market and supply chain disruptions drove a shock 1.1 per cent annualized contraction in the second quarter, Friday’s report supports analysts’ views that consumption, particularly in service sectors, will offset other weaknesses. The food and accommodation sector and a rebound in manufacturing contributed to the August gain, even as the agriculture sector suffered from continued drought conditions.

While high-contact sectors still have room to recover, there’s near-term risk that the delta variant and a return to schools could prompt a slowdown in consumption if COVID cases tick up again. The expansion in August, though positive, isn’t strong enough to propel quarterly growth near the Bank of Canada’s 7.3 per cent annualized forecast for the third quarter.

Based on the figures released Friday, quarterly GDP is now tracking around 3 per cent annualized, according to Bloomberg calculations. The July and August readings are the last before the central bank updates its forecasts at its Oct. 27 policy decision, where it’s expected to taper its asset purchases to $1 billion (US$789 million) a week from the existing pace of $2 billion.

“The Bank of Canada will probably be OK with this release,” Nathan Janzen, an economist at Royal Bank of Canada, said by email. “We will still get another labor market report next week, but for now we think this is probably enough to keep an October taper on the table.”