Canada’s economy expanded more than forecast in October, easing worries of a sharp slowdown amid a second wave of coronavirus.

Gross domestic product grew 0.4 per cent in October from a month earlier, Statistics Canada said Wednesday in Ottawa. Economists were expecting 0.3 per cent growth, according the the median forecast in a Bloomberg survey. The agency also released a preliminary estimate for November, which showed a 0.4 per cent expansion.

Canada’s economy rebounded strongly in the third quarter, but a fresh surge of COVID-19 is hampering the near-term outlook, with new cases surpassing 6,600 a day on average -- more than triple what was seen during the first wave in April and May. While it was the sixth-straight monthly increase for GDP, the October reading marked a slowdown from September, and growth may weaken further in the months ahead. 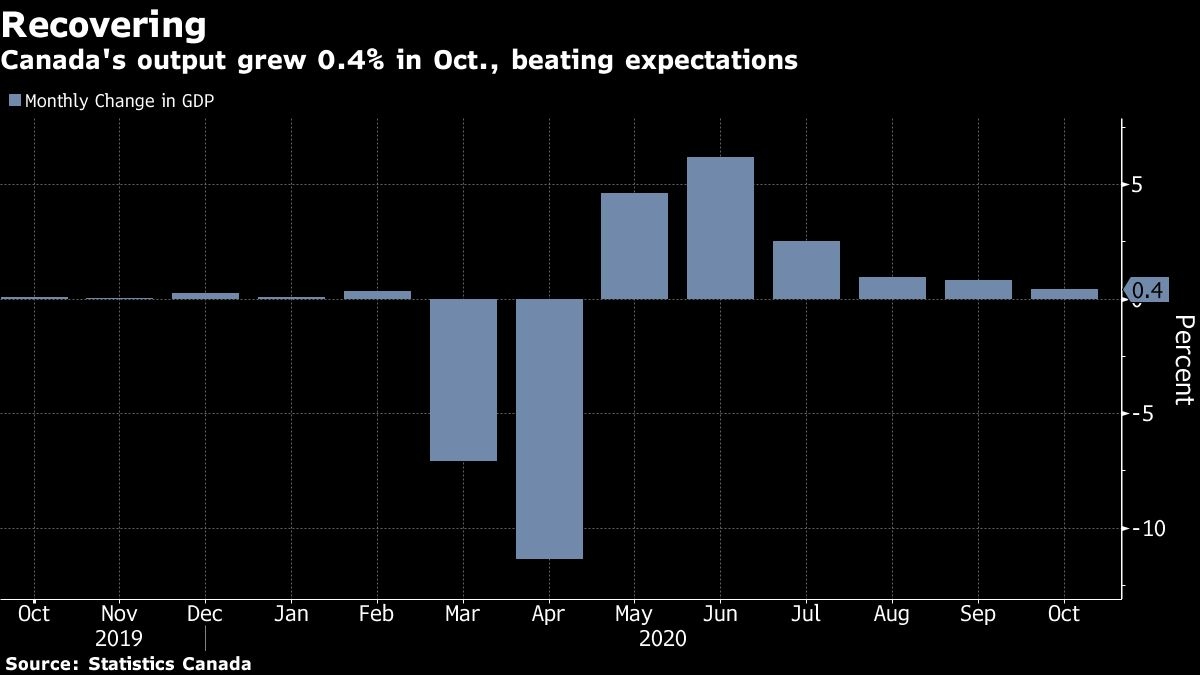 “The economy continued to recover at a decent pace in October and November despite the various restrictions imposed on high-risk services, but the lockdowns coming into effect in Ontario and Quebec mean GDP is set to drop back in December and January,” Stephen Brown, economist at Capital Economics, said in a report to investors.

Goods producing sectors rose 0.1 per cent, while service producers advanced 0.5 per cent, Statistics Canada said. The numbers suggest output in October was about 96 per cent of February levels. Of 20 industrial sectors overall, 16 expanded.

The largest contributors to the expansion were the public sector, as well as professional, scientific and technical services and finance and insurance. The accommodation and food services industry fell for a second straight-month as rising virus cases prompted new closures.

Prime Minister Justin Trudeau’s government is pushing to inoculate as many Canadians as possible before the end of the year, securing more than 400,000 early doses of two COVID-19 vaccines. While economists see vaccine rollouts opening the door to a sharp rebound later in 2021, the country could yet be in for a couple of quarters of short-term pain.