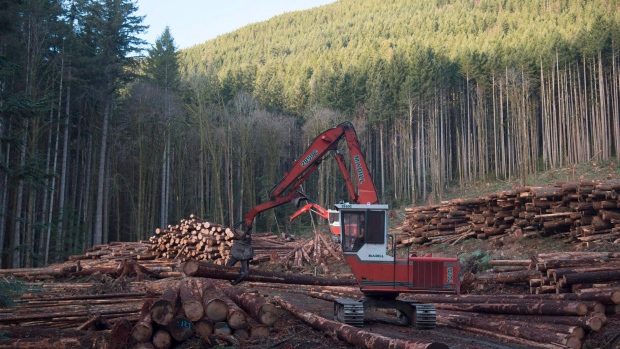 A section of forest is harvested by loggers near Youbou, B.C. lumber , The Canadian Press

The Canadian economy is likely to see limited impact as a result of U.S. duties on softwood lumber, according to National Bank of Canada.

In a research note Tuesday, National Bank Senior Economist Krishen Rangasamy said if Canadian lumber exports to the States stopped completely, the net effect on Canada’s GDP would be half a percentage point.

“While not all that significant in terms of GDP impact, this import duty on lumber sets the tone with regards to upcoming NAFTA negotiations,” Rangasamy told BNN via email. “It will be important to see how Canada reacts and how the U.S. responds to Canada’s rebuttal (are they flexible or not?).”

The Trump administration announced Monday it would impose tariffs averaging 20 per cent on imported Canadian lumber.

“It is likely that the reaction today is on fear that the lumber duties are the tip of the iceberg, showing that despite cosy talk between Trudeau and Trump, the U.S. is willing to flex its muscles to show a protectionist ‘win,’” he wrote.

In his note, Rangasamy said the provinces that stand to lose the most from the tariff are British Columbia and New Brunswick, although forestry only accounts for a small portion of their economies.

Canada exported US$6 billion in lumber last year, accounting for only 1.2 per cent of total exports, according to data from Innovation, Science and Economic Development Canada.