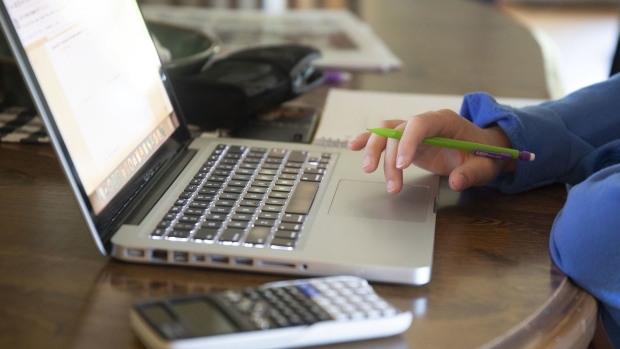 A high school student works on an assignment on a laptop computer at home during a remote learning day in Tiskilwa, Illinois, U.S., on Wednesday, Aug. 19, 2020. Illinois reported 1,337 new coronavirus cases Wednesday as the state's positivity rate dropped below 4% for the first time in weeks. Photographer: Daniel Acker/Bloomberg , Bloomberg

D2L Inc., a Canadian online learning services provider, is seeking to raise $150 million (US$120 million) or more in an initial public offering that would value the company at about $1 billion, according to people familiar with the matter.

Those targets aren’t final and could change as the company sews up the details of the offering in the days ahead, the people said. D2L disclosed its plans Tuesday for an IPO on the Toronto Stock Exchange without providing financial details. The company didn’t immediately respond to an emailed request for comment.

D2L’s offering follows similar deals by other online-education services seeking to capitalize on the increased use and acceptance of remote-learning tools during the pandemic. PowerSchool Holdings Inc., an education-software provider, raised US$711 million in a U.S. IPO that valued it at US$3.47 billion in July, while language-learning app Duolingo Inc. raised US$521 million at a valuation of more than US$6 billion the same month. Shares of both companies have risen since their offerings.

D2L, based in Kitchener, Ontario, was founded in 1999 by Chief Executive Officer John Baker when he was still a student at the University of Waterloo, according to the company’s preliminary prospectus.

The company’s main product is the D2L Brightspace online-learning platform. The company said it had more than 15 million users, including students, instructors and administrators, as of Aug. 31.

D2L’s revenue rose 15 per cent to US$126.4 million in the fiscal year ended Jan. 31, according to the document. The company posted US$1.78 million in income from operations in the period, while the comprehensive loss -- which includes a loss on redeemable convertible preferred shares -- was US$41.7 million.