Oil and gas companies with assets in Colombia dropped Monday after Gustavo Petro won Colombia’s presidential election on a program to move the country away from its reliance on energy exports.

“We continue to believe it is difficult for radical changes to be made due to the balance of powers in Colombia,” Skolnick wrote in a Monday research note, saying Petro will struggle to push his agenda through a divided congress. 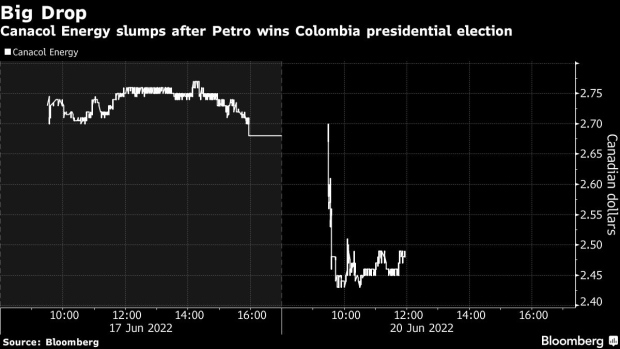 Petro has said he wants to halt auctions of new oil and gas exploration blocks. Yet, many operators have assets in regions that likely won’t be affected, said Skolnick, who also noted that 20 per cent of the government’s income is from royalties, dividends and taxes from state-owned oil producer Ecopetrol SA.

Additional private-sector oil and gas companies including Geopark Ltd. could see weakness when US markets reopen Tuesday after the Juneteenth holiday.

Skolnick noted that Colombian presidents are “limited to one single four-year term” meaning, “the winner is essentially a lame duck, in our view.”