'More needs to be done' by Ottawa to aid the sector: Canola Council of Canada

Simmering trade tensions with China and cool spring weather spurred farmers in Canada, the world’s biggest canola producer and a major wheat exporter, to shift more acres to the grain from the oilseed.

Canola acreage this year fell 0.8 per cent to 20.8 million, the third straight annual decline, Statistics Canada said Monday in a report. Exports of the oilseed, used in everything from salad dressings to deep frying, face hurdles because of the yearlong spat with China, the top buyer.

“Maybe it’s just a case of the overhanging Chinese concerns,” said Tony Tryhuk, the branch manager of an RBC Dominion Securities in Winnipeg, Manitoba. “People are looking at that and saying ‘I don’t want to plant another several fields of the stuff for fear their won’t be a home for it.’ ”

Last year, China suspended the licenses of two major Canadian shippers, citing pest and quarantine concerns. The move was widely interpreted as retaliation over the arrest of a Huawei Technologies Co. executive in Vancouver. 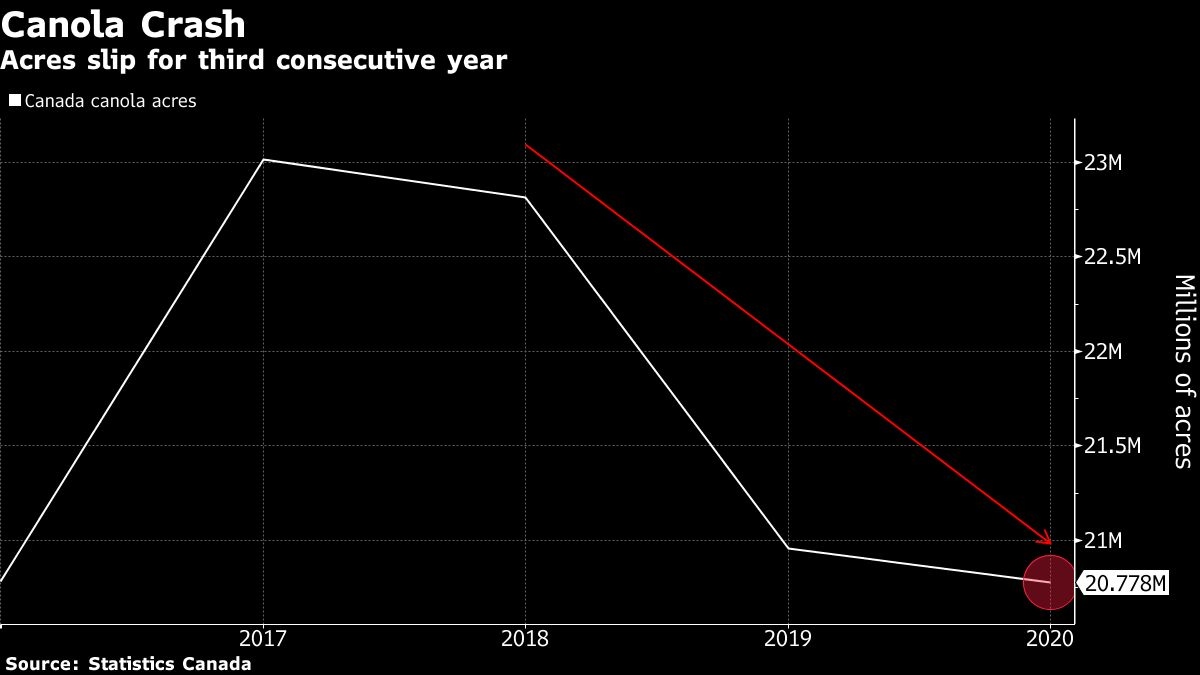 A May ruling that extradition proceedings may continue against Meng Wanzhou, the company’s chief financial officer, dashed prospects for a resolution.

Durum-wheat acreage rose 16 per cent to 5.7 million amid favorable prices and low inventories from the previous crop year, the government said.

The forecast affirmed expectations by analysts and supports the notion that farmers were balking at canola, Chuck Penner, owner of LeftField Commodity Research in Winnipeg, said in a telephone interview. Growers adjusted to muted Chinese demand after last year and farmers in Alberta shifted acres to barley, he said.

“It fits with the idea farmers were having some second thoughts with the risk of putting more acres into canola,” Penner said.