Consolidation is back on in banking sector despite pandemic: The Globe's Willis

Celebration over the legalization of cannabis in five more U.S. states was hardly over when attention turned to what this all means for industry heavyweights north of the border.

Several of the largest Canadian companies reported quarterly results last week, putting them under the microscope as Wall Street tries to figure out how they’ll grow while largely shut out of the rapidly expanding U.S. market. Some are finding ways in, while others are searching beyond. 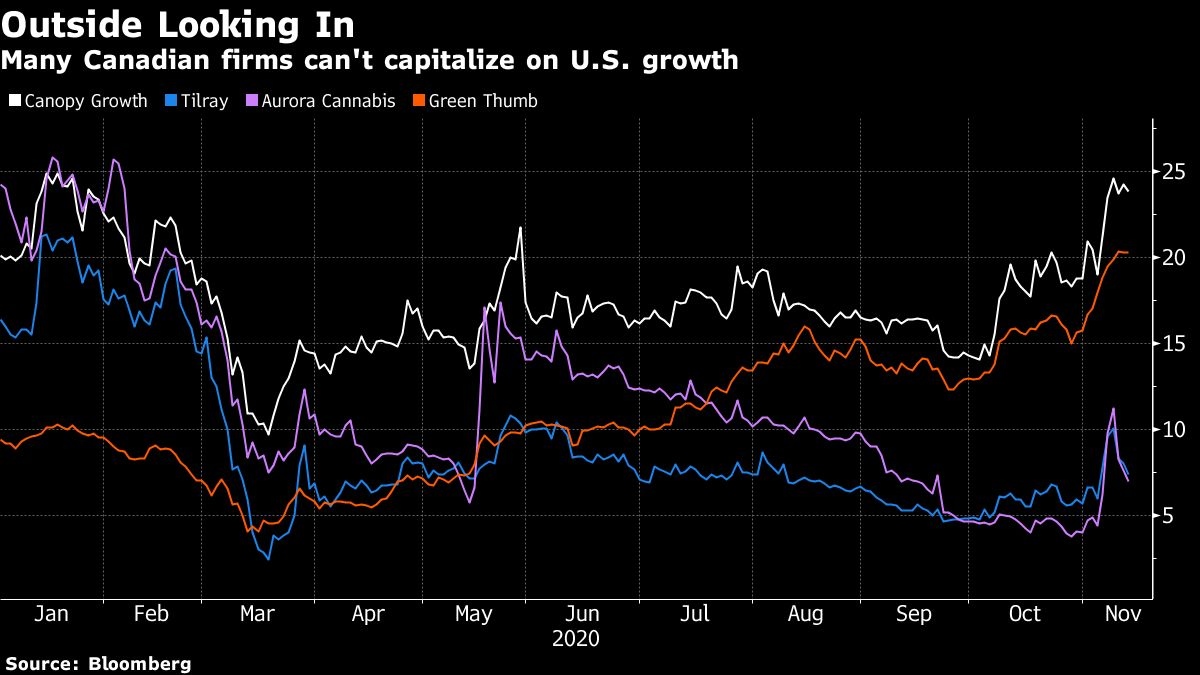 Here’s a look at the strategy pivots laid out by a few prominent Canadian cannabis producers:

Canopy Growth Corp. Chief Executive Officer David Klein is focused on building a brand so strong and distinctive that consumers demand retailers carry it. The company already has a deal with Acreage Holdings Inc. to move into the U.S. within 60 days of federal legalization -- but with the prospects of Republican control of the U.S. Senate, the company probably can’t count on legalization anytime soon. In the meantime, Canopy has a consumer insights organization that’s gathering U.S. and Canadian data.

One goal is to develop products that have pleasant -- and consistent -- effects and flavors, he said. Canopy, which plans to produce cannabis-infused beverages, may try to emulate its majority shareholder, Corona beer maker Constellation Brands.

Pressed by analysts to articulate a pathway into the U.S., Aurora Cannabis Inc. had an entirely different approach. CEO Miguel Martin said he isn’t interested a partnership along the lines of Aphria’s recent deal with a craft brewery to get into the market.

“I don’t think we need it right now,” Martin explained in a phone interview. “I’ve been in the beer business, there’s not synergy there.”

He instead raised an interesting analogy: Monsanto, known for genetically modified crops. Aurora sees its intellectual property, which can help improve crop yields and grow desirable strains of the plant, as a major differentiator.

There’s no advantage in trying to get into the U.S. early to do brand-building now because consumers are finicky, he said. “If the U.S. is to legalize, there will be a lot of consumer testing and tasting and seeing where you want to be.”

For Tilray Inc., North America isn’t even the main focus. CEO Brendan Kennedy instead emphasized pharmaceutical partners around the world, including big names like Novartis. He said Tilray is registering pharmaceutical products in Croatia, where it’s working with the government, and in Australia New Zealand and Latin America, where it has local partners.

“I think you can’t talk about Canopy, Cronos, Tilray and Aphria and also talk about the U.S. cannabis opportunity because they’re fundamentally not connected. In the United States -- Green Thumb, Curaleaf, Trulieve and Cresco -- cannabis is the next great American growth story. We invite the comparisons to cloud computing, online gaming and hard seltzer,” said Ben Kovler, CEO of Chicago-based Green Thumb Industries, addressing the differences between Canadian and U.S. companies.