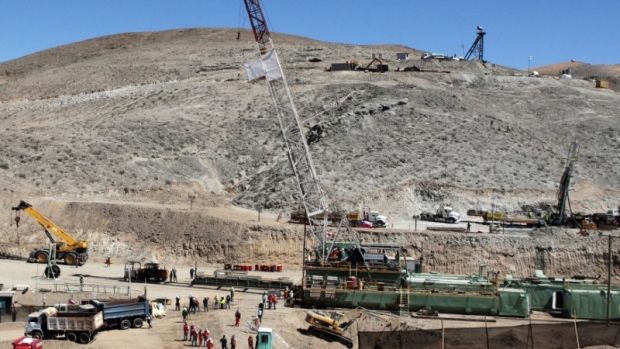 Canada's struggling oil market has found something of a lifeline as traders scramble for heavy crude due to OPEC production cuts and sinking Latin American output.

Output has fallen in Organization of the Petroleum Exporting Countries and non-OPEC Latin American countries such as Mexico and Colombia, leading refiners as far away as China to look to Alberta's oil sands to fill the gap.

The interest has boosted the price for heavy Western Canada Select (WCS) oil, which is within range of its tightest discount to U.S. crude ever.

Canadian heavy oil is an easy substitute for Middle Eastern and Latin American grades, and the rising demand represents a rare bright spot for the oil sands, which have been hit hard by falling prices and the high cost to produce and blend Alberta's heavy, tar-like bitumen.

"We've been seeing a structural change (in the market) since OPEC cut medium sours, and Canadian heavy fits beautifully in there," one trader at an oil sands company said.

Output in Venezuela, an OPEC member, fell 11 per cent in the first five months of the year to a 27-year-low due to underinvestment and infrastructure problems. And as political turmoil mounts there, the United States could impose sanctions that would hinder Venezuela's ability to sell crude.

Mexico's production fell 8 per cent in the first five months of 2017 from a year ago as a result of long-running natural production declines in aging oilfields. Colombia's dropped 11.5 per cent as a consequence of rebel attacks on pipelines.

Venezuela, Mexico and Colombia produce about 5.3 million barrels per day, while OPEC has cut about 1.8 million bpd in supply, most sour crude.

Gulf Coast refiners are paying more for Canadian production to replace these barrels, pushing the discount for Canadian oil delivered to the U.S. storage hub in Cushing, Oklahoma, to around US$5 a barrel below U.S. crude. At current levels that would put the outright price of WCS at Cushing at just under US$45 a barrel.

The narrowest differential at Cushing was US$4.10 per barrel below U.S. crude in mid-2015.

Canada exports more than 3 million barrels of crude daily to the United States, its No. 1 customer, according to U.S. Energy Department data. Canadian barrels could supply refineries in Sweeney, Texas, and St. Charles, Louisiana, where Venezuela accounts for the majority of imports.

Major beneficiaries would be producers with committed capacity on Enbridge Inc pipelines that funnel crude to the Gulf, like Suncor Energy and MEG Energy, because they enjoy lower tariffs than spot shippers.

Sending more Canadian oil to the United States may be difficult due to pipeline constraints, though more oil could be sent by rail, albeit at a higher price. High costs and poor returns prompted international energy companies to sell around US$22.5 billion in Canadian assets this year.

With OPEC cuts now starting to bite in Asia, traders said demand for sour barrels was rising in a region that historically sourced oil from the Middle East and Russia.

Two traders in Calgary said their companies were getting more calls from potential Chinese buyers, and declining freight rates meant more Canadian crude could make its way to Asia.

State-owned Indian Oil Corp bought its first cargo of U.S. and Canadian heavy crude in July, and 1 million barrels of Canadian crude went to China in the first quarter.

"So many tankers out there are looking for work it would not be surprising for somebody to get a sweetheart deal to take it to Asia," said RBC analyst Michael Tran. However, the country's lack of pipelines to the coast make significant exports to Asia unlikely, he said.