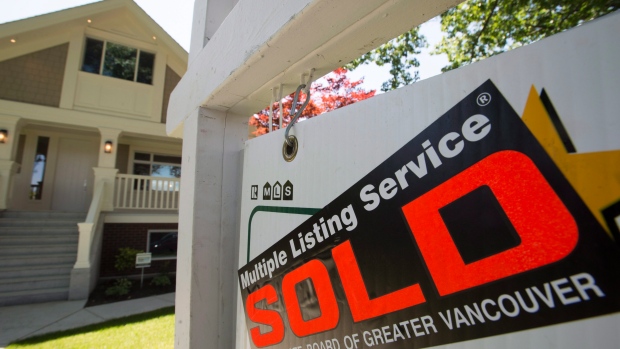 Prices rose 0.3 per cent last month from September and were up 11.8 per cent from a year earlier as Toronto's red-hot market offset the first decline in Vancouver in almost two years, the Teranet-National Bank Composite House Price Index showed.

"Vancouver's market was already slowing before the new mortgage rules in response to very high prices," Sal Guatieri, senior economist at BMO Capital Markets, said in an interview with BNN.

"In fact, there's anecdotal information that suggests that foreign investors ... are now turning to other cities that are not as expensive as Vancouver, because even that market's gotten out of reach for wealthy foreign buyers."

A separate report from real estate agents showed a 2.4 per cent monthly rise in sales in October and a 14.6 per cent surge in annual prices as buyers rushed to get into the market before tighter mortgage rules could take effect.

Taken together, the data showed Canada's market cooling in most markets outside of Toronto, where a building boom and rising household indebtedness have spurred fears of a U.S.-style collapse if borrowing costs, already rising, spike further.

"However, accelerating prices in Toronto and its surrounding areas will only increase the chance of a correction if interest rates rise too sharply ... and the chance of that happening is now somewhat higher under a new U.S. president."

"If the recent increase that we see in bond yields are sustained and continue, then this would eventually have a  cooling effect on housing across Canada," said Robert Hogue, senior economist at Royal Bank of Canada.

Hogue still believes the market will manage a soft landing, as higher borrowing costs take effect gradually, and many borrowers are insulated by fixed-rate mortgages that are locked in, most often for five years.

The Teranet report showed continued strength in Ontario, the most populous province, offset the first decline in Vancouver in 22 months as a new foreign buyers tax doused the market.

Vancouver prices were down 0.6 per cent in October from September but remain 22.5 per cent above year-ago levels. Prices were up 17.4 per cent in Toronto compared to a year earlier.