Canadian households continue to be increasingly optimistic about housing, even as the country suffers through a second wave of coronavirus cases, polling suggests.

About 44 per cent of respondents expect the value of real estate in their neighborhood will go up over the next six months, according to the latest weekly survey by Nanos Research for Bloomberg News. That’s the highest percentage since March 13, before full pandemic shutdowns began and one of the strongest readings for this question in the past seven years. The share of Canadians who expect home prices to drop slid to 27 per cent, also the lowest since mid-March.

The residential real estate market has been a bright spot in Canada’s economic recovery from COVID-19. Last month, home prices and sales reached a record from pent-up demand combined with low interest rates and tight inventory. Although the market has defied expectations, economists predict the gains will peter out in line with other data that shows a slow down in activity as cases rise and restrictions get re-imposed.

“Can it continue this way? Absolutely not,” Benjamin Tal, Deputy Chief Economist at CIBC, said in a telephone interview. “As we enter winter, things will slow down economically and we will see it in the housing market. It doesn’t mean it will go down but it will stabilize and maybe soften a bit.”

The share of Canadians who expect the economy will strengthen over the next six months dropped to 19 per cent, the lowest since June, after Prime Minister Justin Trudeau warned parts of the nation are already experiencing a second wave of cases.

The Bloomberg Nanos Canadian Confidence Index, a composite measure of financial health and economic expectations based off the polling, has been little changed since the end of August after recouping more than four-fifths of its pandemic-related losses.

Sentiment is highest in Quebec and lowest in the energy-rich Prairie provinces. 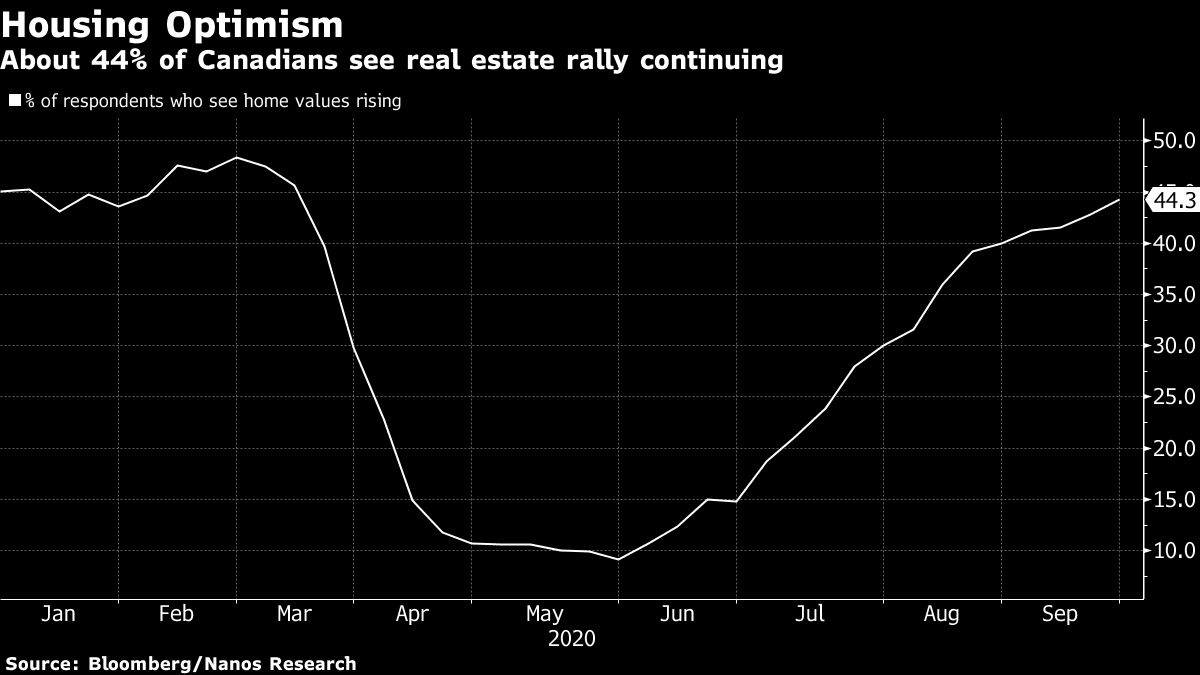