The consumer price index was up 3.7 per cent in July from a year earlier, Statistics Canada reported Wednesday in Ottawa. It last hit that level in 2011. Canada hasn’t recorded inflation above above 3.7 per cent since 2003. Economists were anticipating the rate to increase to 3.4 per cent, from 3.1 per cent in June.

While this marks the fourth straight month inflation has come in above the Bank of Canada’s 1 per cent to 3 per cent control range, policy makers are still likely to view prices pressures as transitory. Governor Tiff Macklem, whose latest forecasts show inflation creeping up to 3.9 per cent in the third quarter before easing at the end of the year, has warned against overreacting to the  “temporary” spike. 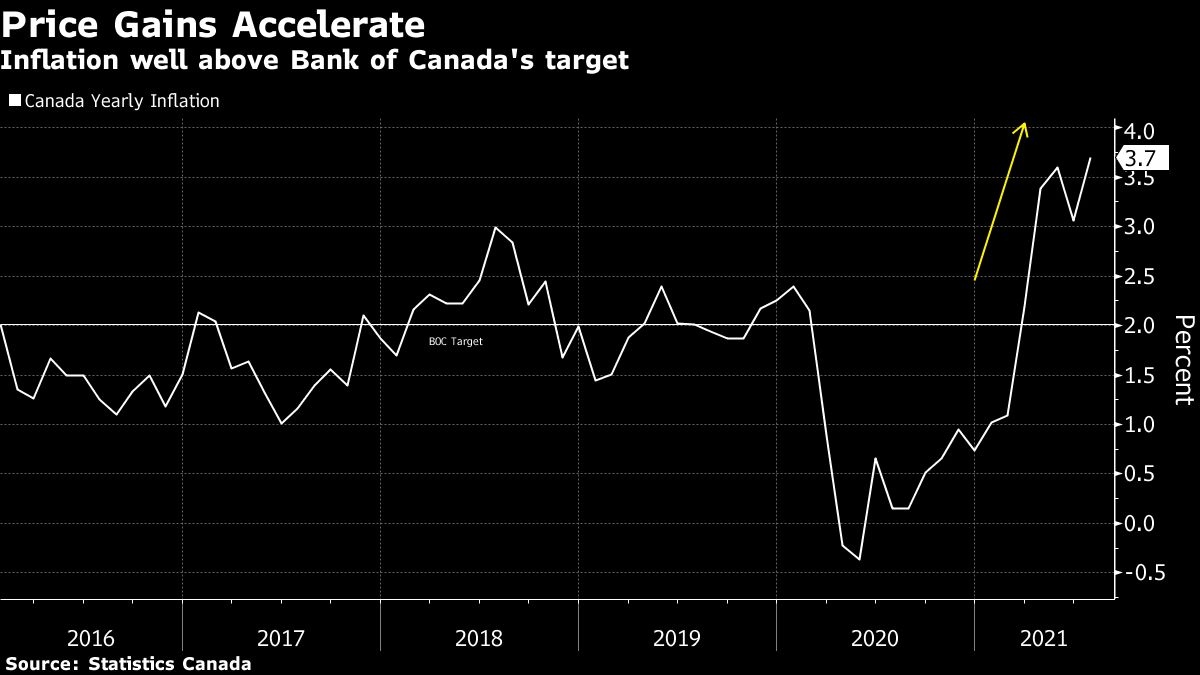 “The Bank of Canada may be willing to tolerate higher inflation while the economy is still re-opening and recovering from the health shock, but it will respond to more lasting price pressures by reducing monetary accommodation,” James Marple, an economist at Toronto-Dominion Bank, said in a report to investors.

BNN BLOOMBERG POLL: Do you think inflation is getting the attention it deserves in the campaign?

But accelerating prices come at an inopportune time for Trudeau, who is seeking to win back his parliamentary majority in a snap election next month. Affordability is a key campaign issue and the main opposition Conservatives accuse the incumbent Liberal government of stoking inflation with its debt-financed spending plans.

“The numbers released today make it clear that under Justin Trudeau, Canadians are experiencing a cost of living crisis,” Conservative Leader Erin O’Toole said in a statement.

The prime minister, asked about that criticism at a campaign stop in Vancouver later Wednesday, shot back: “I don’t think Erin O’Toole can be considered serious when he’s turning his back on getting women into the workforce.”

Trudeau has earmarked $30 billion (US$23.7 billion) in transfers to provinces for his pledge to deliver $10 daycare within five years. The Conservatives, if elected, would scrap that plan in favor of a sliding scale of tax credits for families.

The average of core inflation readings, a better gauge of underlying price pressures, rose to 2.47 per cent in July, the highest since 2009.

On a monthly basis, prices rose 0.6 per cent versus a consensus estimate of 0.3 per cent. Rising costs to own a home are one of the biggest contributors to the elevated inflation rate, following a surge in real-estate prices over the past year.

Asked whether he would support giving the Bank of Canada more flexibility to tolerate higher inflation when its mandate expires this year, Trudeau declined to comment directly.

“When I think about the biggest, most important economic policy this government, if re-elected would move forward, you’ll forgive me if I don’t think about monetary policy,” he said. “You’ll understand that I think about families.”

The inflation pick-up in recent months has been a global phenomenon, driven by supply bottlenecks and higher energy prices. Car prices continued to rise, partially due to a shortage of semiconductor chips.

The reopening of Canada throughout the summer has also put upward pressure on prices, with faster growth seen in services that were able to restart after months of COVID-19 suspension like indoor dining. But price growth is becoming more widespread, Wednesday’s data show.

“The pandemic’s effect on price growth is not only on the supply side, where production disruptions are adding to the cost of manufactured goods such as autos, but also on demand, where policy supports have driven robust spending on housing and durable goods items,” Marple wrote.