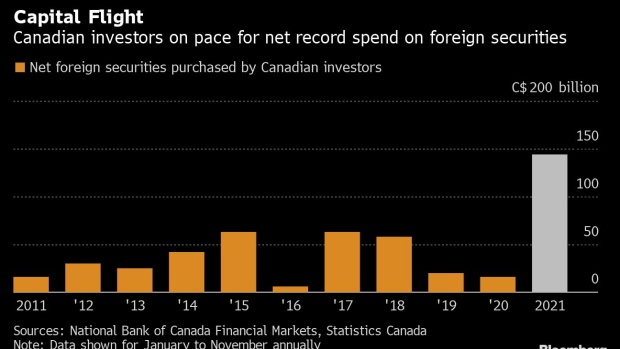 A trader works on the floor of the New York Stock Exchange (NYSE) in New York, U.S., on Monday, Jan. 3, 2022. As 2022 begins, the overriding message from almost 50 financial institutions across Wall Street and beyond is that conditions still look good, but the rip-roaring rallies powered by the reopening are history. Photographer: Michael Nagle/Bloomberg , Bloomberg

(Bloomberg) -- Canadians are shunning their domestic market and investing record amounts abroad, according to National Bank of Canada Financial Markets.

“We have a really exceptional amount of money leaving the country to seek out exposure in U.S. equities like never before,” Warren Lovely, managing director, economics and strategy at National Bank of Canada said by phone. Canada has an ongoing “capital bleed problem” that needs to be addressed with a competitive tax environment and moving on environmental, social and governance concerns, he added

Still, Lovely said in a report Monday that foreign investors continue to pour money into Canadian securities to the point that net portfolio flows are positive for Canada as a whole.

Tech stocks have a 9% weighting on the S&P/TSX Composite, compared with 28% on the S&P 500 Index, according to data compiled by Bloomberg.

“It would be nice to have a more diversified economy to not have Canadians fleeing,” said Ari Pandes, associate finance professor at the University of Calgary, adding that domestic investors looking for tech exposure flock to the U.S., given the relative size of the sector.

On the fixed-income side, investors in Canadian government bonds were hurt in 2021 by rising inflation. On Monday, Canadian businesses reported widespread challenges with supply chains and labor shortages in a central bank survey -- fueling expectations of a rate hike by the Bank of Canada as early as next week.