Canada’s job market roared back to life faster than expected in June, reversing the bulk of employment losses from country-wide lockdowns earlier this year.

The economy added 230,700 positions last month, Statistics Canada said Friday in Ottawa, versus economists’ expectations for an increase of 175,000. The nation had lost 275,000 jobs in April and May as governments shut down parts of the economy to contain a third wave of COVID-19 cases.

The report is another signal of an imminent economic boom, and shows companies are prepared to rehire workers as pandemic restrictions are lifted. The results also reinforce expectations the Bank of Canada will continue paring back its aggressive monetary policy stance at its July 14 policy decision.

“For now, this is just the latest piece of evidence that the Canadian economy is rebounding from the third wave, leaving few, if any, obstacles to another taper from the Bank of Canada,” Benjamin Reitzes, Canadian rates strategist at BMO Capital Markets in Toronto, wrote in a report.

The unemployment rate fell to 7.8 per cent from 8.2 per cent.

The Canadian dollar was little changed on the report, trading 0.3 per cent higher at 9:58 a.m. in Toronto. One U.S. dollar buys $1.2493. With the June gains, Canada has recovered 2.65 million of the 3 million jobs lost at the height of the pandemic last year. 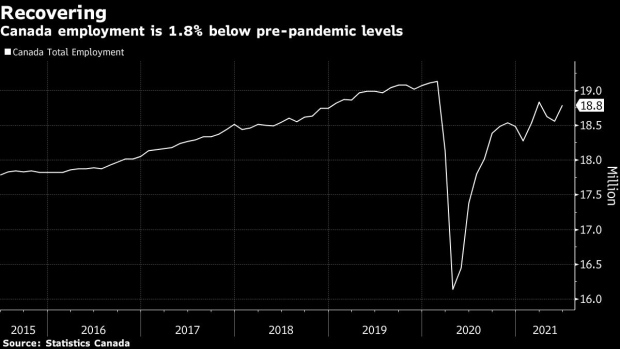 There was one bit of weakness in the report. All the gains were in part-time employment, with full-time jobs down for a third straight month. As a result, total hours worked were down 0.2 per cent on the month despite the employment gain.

On the plus side, the labor force jumped by 169,900, suggesting firms who want to hire will have greater success recruiting workers. The labor force participation rate rose to 65.2 per cent, fully recovering from two months of declines.

“The rising participation rate should alleviate some concerns about widespread labor shortages,” Royce Mendes, an economist at Canadian Imperial Bank of Commerce, said in a report to investors.

The bulk of the gains last month were in pandemic-exposed sectors, like retail, food and accommodation that got hit most by the new containment measures. Employment in accommodation and food services was up 101,000. The retail sector added 75,000 jobs.

The jobs report is the last major piece of economic data before next week’s central bank policy decision. The Bank of Canada is among the first from advanced economies to shift to a less expansionary policy, having already cut its purchases of Canadian government bonds to $3 billion (US$2.4 billion) weekly from a peak of $5 billion last year.

Analysts anticipate that will come down to $2 billion next week, before eventually falling to a weekly pace of about $1 billion by late this year or early 2022. In addition to the bond tapering, the market has priced in at least one interest rate hike by this time next year.

With vaccination rates rising and restrictions easing, economists are predicting a strong rebound in the second half. Canada’s expansion is seen accelerating to an annualized pace of 9.1 per cent in the third quarter, with a 6 per cent gain in the final three months of 2021, according to a Bloomberg News survey of economists earlier this month.

Economic output and employment are on pace to fully recover pandemic losses before the end of this year.