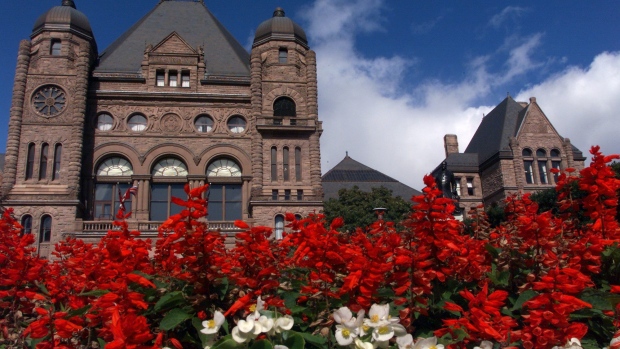 The Ontario Legislature building sits in Queen's Park in Toronto, Wednesday, October 6, 1999. The building was completed in 1892 and was designed by Buffalo, N.Y. architect Richard Waite. , CP PHOTO/Frank Gunn

A group of Canadian law firms have sent a letter to Queen's Park lambasting the Ontario government for recent changes made to its business registry system, stating a list of broad-ranging issues they claim could have a "chilling effect" on doing business in the province.

The letter - co-signed by 16 law firms including some of Canada's biggest - said that the changes to the registry system have led to "system shutdowns, technical glitches and substantive problems," which have delayed the completion of some company transactions while raising costs for businesses or imposing unplanned tax implications. As a result, these law firms are now recommending their clients do their registry services through federal agencies or in other provinces.

"Given our collective (Ontario Business Registry) experiences to date, we have no confidence or assurances that year-end registrations and filings—the busiest time of the year for our law firms—can be completed without putting entire transactions at risk," states the letter, which was delivered to Ontario government officials on Nov. 19.

The province unveiled a new registry service in October aimed at moving businesses away from paper-based filings to digital services available at any time while reducing legal costs. The registry system, which typically handles such services as registering a new business or dissolving an existing one, previously took weeks to process filings that were submitted by fax or mail, the government said in a statement.

While the registry system is a relatively obscure and hidden part of the dealmaking process, it does strike a blow to the Progressive Conservative government, which has frequently extolled its business bonafides since entering into power in 2018.

Sebastian Skamski, director of communications for the Office of the Minister of Government and Consumer Services, told BNN Bloomberg in an emailed statement that the registry service is in its early days of deployment and is being constantly monitored for any issues that may arise.

"To this end, continuous, timely improvements have been made on a rolling basis, with an update coming into effect this past Monday that addresses key issues," Skamski said. "Additional planned updates are being routinely implemented, and in the coming week the overwhelming majority of issues should be resolved."

In an appendix attached to the letter, the firms outline more than 50 outstanding technical and form issues tied to the new registry service that range from data migration errors to incorrect formatting to the entire registry system being offline during business hours.

"We also strongly believe that practical and timely work-arounds need to be put in place until the most critical deficiencies of the (Ontario Business Registry) are corrected," the letter states. "The timing of corporate transactions is critical and we cannot rely on the current advice from the Ministry and service providers that we simply file amendments after the fact."

In addition to the complaints lodged against the registry service, the law firms urged the government to revisit launching a committee that includes industry participants to help figure out how to solve the myriad of issues the users are currently grappling with.