The increase was led by the motor vehicle and motor vehicle parts industries and followed a revised gain of 11.6 per cent in May, up from an initial reading of 10.7 per cent for that month.

Economists on average had expected an increase of 16.4 per cent for June, according to financial markets data firm Refinitiv.

Royal Bank senior economist Nathan Janzen said much of the initial recovery in manufacturing sales to-date, as in the broader economy and labour markets, is due to its return from unprecedented declines in April.

“Beyond this initial bounce, the pace of recovery will still likely moderate,” Janzen wrote in a brief report.

“The near-term bounce-back in economic activity has been encouraging, but the economy is still operating well below capacity, and very likely still will be at the end of the year. 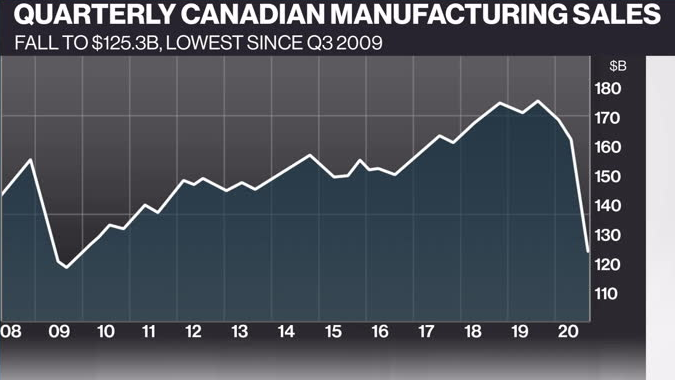 In volume terms, manufacturing sales increased 18.4 per cent in June.

Sales in the transportation equipment industry more than doubled to $8.8 billion in June as most factories in the automotive sector returned to full production following shutdowns earlier in the pandemic.

Sales in the petroleum and coal product industry also rose by 31.5 per cent to $3.3 billion in June due to higher prices and volumes as refineries ramped up production.

Despite the gains, total manufacturing sales in June were 13.2 per cent below their pre-pandemic level in February.

Manufacturing sales in the second quarter totalled $125.3 billion, down from $162.4 billion in the first quarter of the year, record 22.8 per cent drop.

Statistics Canada said the total for the second quarter was the lowest since the third quarter of 2009 toward the end of the financial crisis.

In volume terms, manufacturing sales fell 20.5 per cent in the second quarter.