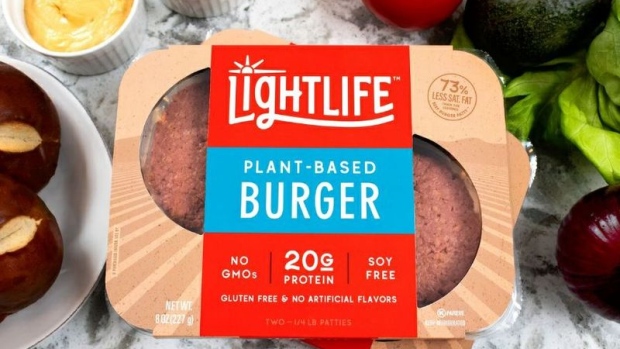 Watch out, Impossible. Beware, Beyond. A new competitor is entering the plant-based burger market.

Like its well-publicized competitors, the new burger is meant to be more like beef than its hockey puck-esque forebears. Unlike Impossible Foods Inc. and Beyond Meat Inc., which mostly rely on venture capital (1), Lightlife has the resources of a giant meat producer to help sell it. In 2017 the brand became a fully owned subsidiary of Maple Leaf Foods Inc., the US$2.6 billion Canadian meat conglomerate, which later placed Lightlife under the control of a newly created plant-based division, Greenleaf Foods SPC.

That in-house expertise allowed the burger to go from concept to production in just six months, said Dan Curtin, president of Greenleaf. The company will also take advantage of the relationships it already has to help land the product in stores and restaurants, he said.

Lightlife is hoping to expand the audience beyond its core consumer base of traditional vegans and vegetarians for its new product, targeting so-called flexitarians and anyone looking to reduce their meat intake. The marketing budget is the largest in the company’s history, Curtin said.

Nearly one-third of consumers see plant-based burgers as healthier than their meat counterparts, according to research from Mintel, and 29 per cent say they’re acceptable fare for meat eaters. Only 15 per cent say they taste as good as real burgers, however, and just 5 per cent say they’d go to a casual dining restaurant to order one.

“Consumers may realize the product is healthier for them and their family, but when it boils down to it they’re probably going to go with the thing that tastes better or they’re more familiar with,” said Billy Roberts, senior food and drink analyst at Mintel. But manufacturers such as Lightlife are targeting younger consumers, he said, who are more likely to try new products they see as healthier.

Supermarkets may prove a more successful selling environment. “It’s easier to eat healthy at home,” said Meagan Nelson, associate director of fresh growth and strategy at Nielsen. As plant-based burgers shift into the meat section, she said, more consumers will likely reach for them.

In supermarkets, sales of meat alternatives are up 19.2 per cent, reaching US$878 million for the year ended Jan. 5, 2019, according to data from Nielsen. Meat alternative patties — known colloquially as veggie burgers — represent about 24 per cent of that market.

At Maple Leaf the expectations are high, even as meat-mimicking burgers become more widely available. “It has the potential to become a crowded field for a period of time,” said Chief Executive Officer Michael McCain. “But we have a superior product offering on taste, mouthfeel and nutritional profile.”

The burger itself is pink in raw form, is juicy when cooked and chars to a darker pink rather than the brown of real meat. “The ambition is to achieve a taste and a mouthfeel experience for consumers that replicates largely, if not fully, what they would experience on a burger,” McCain said.

The Lightlife Burger will have 270 calories—the same as the Beyond Burger and slightly more than the new Impossible Burger, which has 240—but a shorter ingredient list than both. Like Beyond it’s made with a pea protein, an increasingly popular ingredient in the world of meat and dairy substitutes. The simpler ingredients and its non-GMO, soy-free, gluten-free pedigree may give it a leg up on its competitors.

“Plant-based proteins are kind of complicated to produce,” said Mintel’s Roberts. “Consumers can be a little concerned when they see a complicated ingredient legend.”

There’s another way it’s different, too, one that underscores Lightlife’s key consumer base of vegans and vegetarians.

“We stay away from the word ‘bleeding,’” Curtin said.