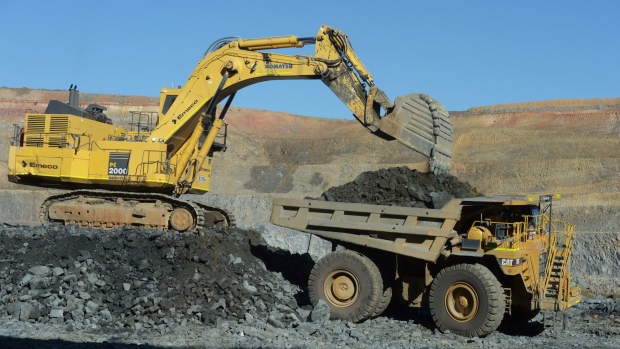 An excavator deposits ore into the back of a dump truck in the White Foil open mine pit at Evolution Mining Ltd.'s gold operations in Mungari, Australia, on Tuesday, Aug. 8, 2017. Evolution Mining is Australia’s second-largest gold producer. Photographer: Carla Gottgens/Bloomberg , Bloomberg

British Columbia-based Midas Gold filed the lawsuit Tuesday in U.S. District Court against the U.S. Forest Service under the Clean Water Act's citizen enforcement provision. The area contains important salmon habitat that the company says it will restore if allowed to mine.

Midas Gold, which has yet to do any mining in the area but has claims, is itself being sued by the Nez Perce Tribe over the same pollution caused by past mining companies.

The company said that if the tribe were to win, the result would be a legal conflict between a court injunction and a permitting process involving land the company doesn't own. The company also contends it could have to pay to clean up pollution it didn't cause.

“This action was a necessary step to protect Midas Gold from being held responsible for alleged water pollution from lands owned and managed by the U.S. Forest Service,” Midas Gold CEO Laurel Sayer said in a statement.

The Nez Perce Tribe didn't respond with a comment following a request made Wednesday to the tribe's spokeswoman, Kayeloni Scott.

The tribe has opposed Midas Gold's mining plan for various reasons, including about 80 miles (130 kilometres) of river with good salmon habitat below the mining area that could be put at risk with new mining.

The lawsuit comes less than a week after the Forest Service released a draft environmental assessment of Midas Gold's plans to mine the area. A 60-day comment period is being held on the draft, after which the Forest Service will select from among five alternatives for potential mining.

The U.S. Department of Justice, which defends federal agencies in lawsuits, didn't respond to an inquiry from The Associated Press sent through its online media portal.

Midas Gold says the area 40 miles east of McCall and on the western edge of the Frank Church-River of No Return Wilderness contains more than 4 million ounces of gold, and that the mines will create 500 jobs for up to 25 years. The company also says it plans extensive restoration work as part of its mining plan will take care of the current pollution problem.

Mining in the area dates back more than a century and has resulted in two open pits, including one that has been blocking a salmon spawning stream since the 1930s. The site also has extensive tailings left from mining operations, waste rock dumps and open tunnels that are the source of elevated levels of arsenic, cyanide and mercury.

“Discharges from these locations undermine Midas's efforts and vision to restore the site and environment concurrent with all future mining phases,” under its mining and restoration plan, the company said in the lawsuit.

Previous mining companies walked away, leaving cleanup to U.S. taxpayers. The U.S. Environmental Protection Agency has spent about $4 million since the 1990s restoring habitat, work that would be mostly removed with new mining.

Opponents also say the mining area will be greatly expanded, destroying additional habitat for salmon, steelhead and bull trout. They also worry that U.S. taxpayers will get stuck with clean-up costs when mining ends.