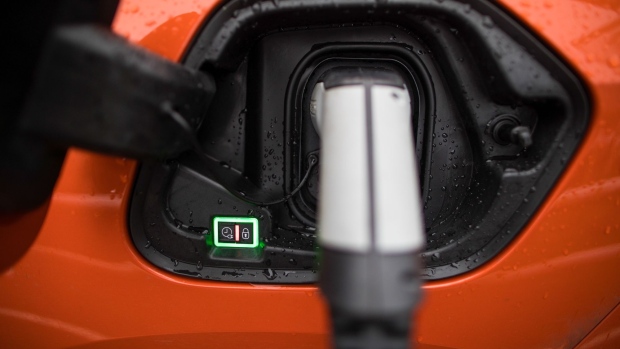 A plug-in electric vehicle charges on the forecourt of an automobile dealership, operated by Pentagon Motor Group, a division of Motus Holdings Ltd., in Lincoln, U.K., on Wednesday, Oct. 21, 2020. As the earnings season picks up pace, an improving outlook for carmakers may further boost the sector thats already leading Europes stock rebound since March. Photographer: Chris Ratcliffe/Bloomberg , Bloomberg

CALGARY - A Canadian company developing new control products to improve efficiency and performance in electric motors and powertrains is aiming to raise between $30 million and $36.5 million through a public offering of its shares.

Exro Technologies Inc., which closed a lab in Victoria and opened a new innovation centre in Calgary over the summer, says it has priced the shares at $3.25 each.

The offering is to be conducted on a "best efforts" basis by a syndicate led by Raymond James Ltd. and Gravitas Securities Inc., with an overallotment option of up to 15 per cent. The offering is to close on or about Dec. 8.

The news comes a few days after Exro reported the engineering validation of its 100-volt coil driver, which it said was a "key milestone" for its entry into supplying commercial products to manufacturers in the electric car market.

It said it is on schedule to deliver a prototype to Potencia Industrial, S.A. DE C.V., a Mexican manufacturer of electrical motors and generators.

In a recent interview, CEO Sue Ozdemir said the company relocated to Calgary because of its relatively low cost industrial space and availability of engineers, some of whom are former oil and gas workers, as employees. She said the company has doubled its staff count to about 20 since last year and is still hiring.