Canadian crude lost some of its gains Tuesday after surging by the most ever when Enbridge Inc. said it won’t implement a new procedure to stop shippers from claiming more space than they can use on a key pipeline linking Alberta’s oil sands with U.S. refineries.

Western Canadian Select jumped as much as US$12.20 a barrel to US$13.80 below the U.S. benchmark Monday, the narrowest spread since May 16, as of 3:27 p.m. ET Tuesday. Canadian crudes have weakened to historically low levels in recent weeks as growing production overwhelms available pipeline capacity to transport Alberta’s supplies south of the border.

Canada’s biggest crude-export pipeline operator told shippers Monday that it won’t proceed with recently announced rules setting an allowance for the amount of crude companies could nominate for transport on its mainline. The move came after discussions with shippers, Enbridge said.

"Producers have a strong say in how the market is going to be participated in,” Tim Pickering, chief investment officer at Auspice Capital Advisors Ltd., said in a phone interview from Calgary. The Enbridge turnabout shows that "the pipelines can’t just do changes that aren’t fair and are not conducive” to its customers. 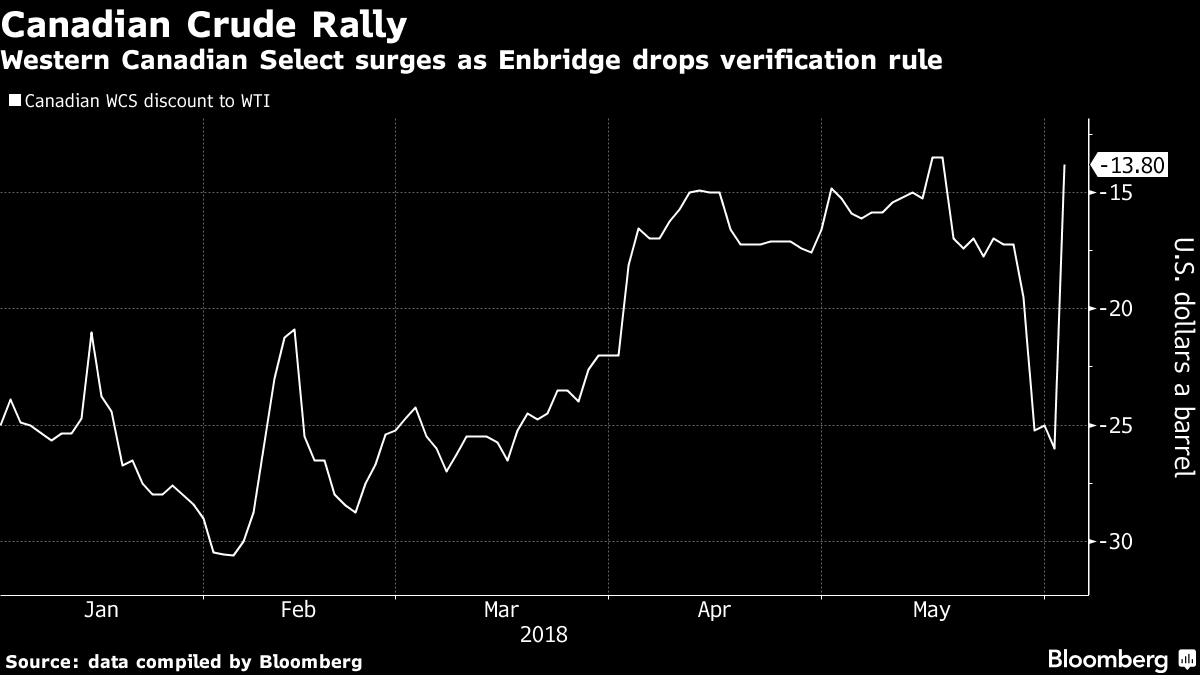 The National Energy Board, Canada’s pipeline regulator, didn’t intervene on the Enbridge matter and received no complaints, spokeswoman Chantal Macleod said in an email.

In a notice last month, the company informed shippers that their volumes would be based on a 12-month rolling average, plus 15 per cent for heavy crude and 40 per cent for light crude and that the new rules applied to July shipments onward. Shippers who wished to send more than their allotted amount would have had to show physical proof of the volumes.

"Enbridge’s mainline system continues to be oversubscribed," Enbridge said in a statement. "We have been engaged with our customers to improve the nomination process and will continue to work directly with them on this issue."

- With files from BNN Bloomberg