Canada’s oil production will rise for the next decade and then start declining as countries strive to curb greenhouse gas emissions, potentially reducing revenues from the country’s biggest export.

Output at the world’s fourth-largest oil producer will climb to 5.8 million barrels a day by 2032, from 5 million this year, and then decline to 4.8 million barrels daily in 2050, according to a report issued Thursday by the Canada Energy Regulator.

An impending decline in oil exports poses a challenge for the Canadian economy. Canada is the largest foreign oil supplier to the U.S. and the country has the world’s third-largest crude reserves locked in its oil sands region of northern Alberta. The oil and gas sector has accounted for about 5 per cent of Canada’s economy. 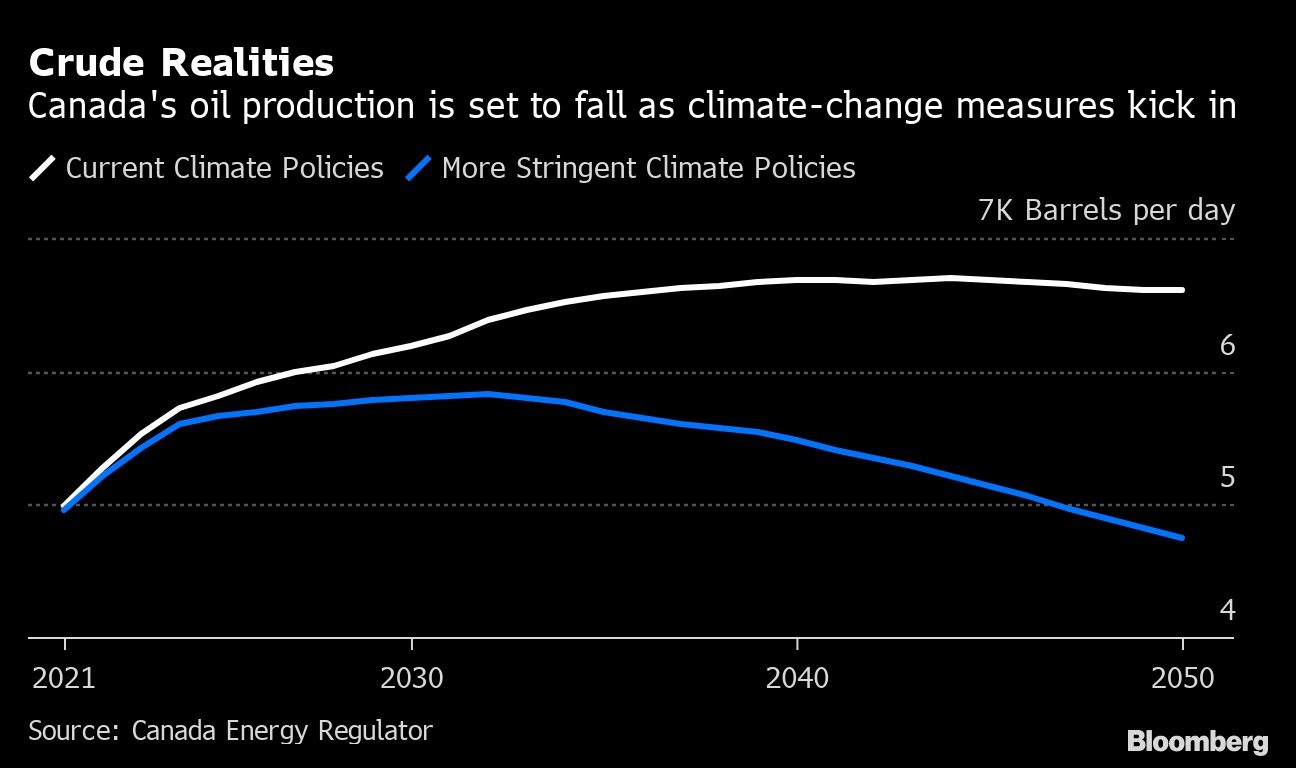 The projections by Canada’s energy regulator are based on countries continuing to strengthen measures to fight climate change, which will contribute to inflation-adjusted Brent crude falling to US$40 a barrel by 2050 from this year’s annual average of US$68 a barrel. Should climate change measures be less stringent, Canadian output will plateau at 6.7 million barrels a day in 2040 and Brent will average US$70 a barrel through “much” of the projection period, the report predicts.

While conventional and shale oil companies must constantly invest in drilling new wells to keep production steady, the slow natural decline in output from the oil sands will mean that levels remain relatively “resilient.” Oil sands producers invest billions in new mines or steam-assisted production wells and once in operation those facilities last for decades at little cost compared to conventional or shale oil wells.

Still, the report warned that much more ambitious carbon-reduction plans, in line with the International Energy Agency’s 2050 net-zero scenario published earlier this year, could lead to “significantly lower” Canadian production levels than what are projected. Canadian energy producers have proposed plans to zero out emissions from their facilities, mostly by extracting and sequestering carbon underground, but they’re seeking the government to fund as much as 75 per cent of those schemes.

Canada’s own energy consumption will decline over the next 30 years and grow increasingly cleaner, the regulator said. Total primary energy use is expected to drop 21 per cent by 2050 and fossil-fuel consumption that is not abated with carbon-capture methods will fall 19 per cent by 2030 and 62 per cent by 2050.

Canada’s first LNG plant is being built in the western province of British Columbia and is scheduled to start operating in the first half of this decade. LNG exports will allow B.C. will surpass Alberta as Canada’s largest natural gas producing province by 2028