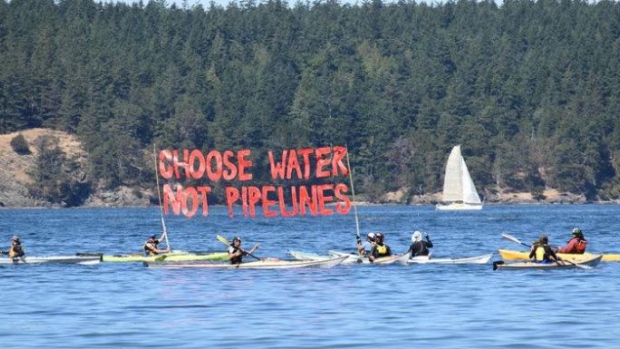 The proposed project would triple capacity on an existing pipeline and transport 890,000 barrels per day of crude from northern Alberta's oil sands to Westridge docks in the Port of Vancouver for loading onto tankers bound for refineries as far afield as Asia.

Activists aim to halt building work scheduled to start next month at Westridge terminal, located about 50 miles (80 km) north of Lopez Island, by launching a campaign from the water. Westridge is one of a handful sites along the pipeline owned by Kinder Morgan and protected by 10-foot-high (3m high) chain link fencing and security guards.

The pipeline is fiercely opposed by groups concerned it will accelerate oil sands development, worsen climate change and increase the risk of an oil spill in the waterways around British Columbia and Washington known as the Salish Sea.

Canada is home to the world's third-largest crude reserves but has limited pipeline capacity to transport its oil from landlocked Alberta to international markets.

"We support the right to peacefully and lawfully express opinions and views about our project," Ali Hounsell, a spokeswoman for the Trans Mountain project, said on Monday. "When it comes to our operating and construction sites, safety is our first priority - safety of our workers, communities and everyone near our worksites."

Waterborne protests will be the latest challenge to a pipeline already facing legal action from environmental, indigenous and landowner groups, as well as the new Green Party-backed British Columbia government that came to power in June.

Back on land, members of a dozen environmental groups including Greenpeace and the Indigenous People's Power Project used the camp to discuss strategy and tactics to thwart the expansion.

"We will be in the water blocking them. This camp is about how to safely intervene directly with construction barges, tugs and oil tankers in a way that challenges them in a safe and disciplined way," said John Sellers, a member of the Mosquito Fleet, a group previously involved in seaborne protests against Royal Dutch Shell's RDSa.L Arctic drilling fleet.

Kinder Morgan is still waiting for British Columbia to accept five out of the eight environmental plans it needs before starting construction work on public land, and the province said the company will not receive final approval unless it does a better job of consulting indigenous people. (Full Story)

The Westridge marine terminal on the south shore of steep-sided Burrard Inlet is also partially located on federal land and waters managed by the Vancouver Fraser Port Authority, which is reviewing the building permit application, spokeswoman Danielle Jang said by email last week.

Kinder Morgan plans to start construction on a new three-berth loading dock and additional supporting infrastructure in September but the environmentalists are confident they can get in the way and cause delays.

"That will become one of the primary targets because so often you have to block them (pipeline projects) before they make them," said Sellers, who will not be able to join any protests because he is banned from entering Canada due to past arrests.