The pathway to the U.S. cannabis market is being watched closely by Canadian companies eager to enter the frenzied space. But an already well-trodden path exists for those companies seeking an early advantage over their Canadian peers - CBD.

As the U.S. cannabis market remains closed due to the drug still illegal federally, although more than half of the country's states have passed measures allowing its sale for either medical or recreational purposes, Canadian companies have begun to move in earnest to establish a U.S. presence but solely in the CBD space.

Products just containing CBD, the chemical compound derived from the cannabis plant that doesn't impair users, have been allowed for sale across the U.S. following the passage of the 2018 Farm Bill. The U.S. Food and Drug Administration (FDA) is also investigating how to regulate CBD for ingestible use, although it's unclear when it plans to make a formal decision.

Cannabis extractor Valens Co. was the latest to pursue that strategy after it agreed to buy Florida-based Green Roads for US$40 million in cash and stock, plus an additional US$20 million if certain sales milestones are met. Other companies that employed a U.S. CBD strategy include Aurora Cannabis Inc., Cronos Group Inc., Canopy Growth Corp., Tilray Inc., and retailer High Tide Inc.

"Our intention is to go down there, optimise a few of their opportunities and then basically build around that management team to continue to basically forge forward until THC becomes legal in the U.S.," said Tyler Robson, chief executive officer, at Valens in a phone interview.

"We believe the opportunity in Canada is still big, but the U.S. is bigger."

But the U.S. CBD market isn't a guaranteed home run for some market entrants. While sales of CBD products in the U.S. is expected to rise to US$16.8 billion by 2025 from US$4.7 billion last year, the market is filled with roughly 1,500 brands offering a relatively commoditized product, making it somewhat difficult for some companies to stand out, said Bethany Gomez, managing director of Brightfield Group, a cannabis consultancy. 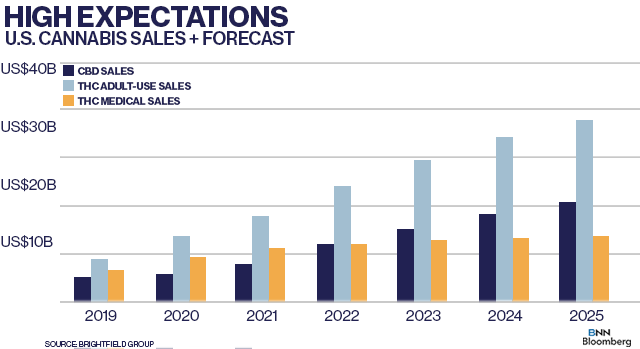 "The Canadian market is more constrained than what many companies initially thought with some well-capitalized producers duking it out for a relatively small pool. The CBD market gives them the ability to add more revenue to their top line," Gomez said in a phone interview.

However, Lopez isn't sure how easy it will be to convince U.S. consumers may be amenable to transitioning from CBD to a product containing a more inebriating substance like THC.

Aurora Chief Executive Officer Miguel Martin said the company's Reliva subsidiary is trying to stand out from the rest of the pack by disclosing lab analysis results for its CBD products to show there are no harmful ingredients indirectly added to them. Aurora has only made about $2.7 million from its U.S. CBD business since it acquired Reliva last year, but Martin expects the market to improve once the FDA makes its ruling on the cannabinoid.

"Right now, the numbers are really small, but the retailers in the same place," he said. "They believe it needs to be big at some point, they liked the [product] basket and they wanted [to work with] an ultra-conservative company, which is what we are."

Meanwhile, Canopy Growth has made the most of its U.S. CBD ambitions, launching five different brands into the market, including the hotly-touted Martha Stewart line-up of gummies and its Biosteel sports nutrition drinks. The company hasn't disclosed how much  U.S. CBD sales it's made yet, but Rade Kovacevic, Canopy's president and chief product officer, said its Martha Stewart products have outsold 94 per cent of all CBD brands in the U.S. in just four months after it was launched.

"While the inputs may be commoditizable, the brands and the finished goods leave us with a traditional [consumer-packaged-good product] which are not commodities," Kovacevic said.

Along with raising brand awareness in the U.S., Kovacevic added that the company's relationship with its main investor Constellation Brands Inc. has helped with the distribution of its drink products like Quatreau, which is something Canopy could leverage once the U.S. legalizes cannabis federally.

"We've entered a highly fragmented market without any clear consolidation of consumer demand," he said. "That's a very exciting place to play because there are lots of consumers across the United States who are interested in CBD products."