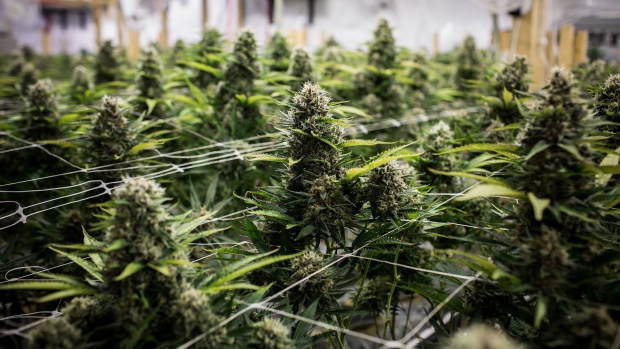 A resident smokes a marijuana joint during the 420 Day festival on the lawns of Parliament Hill in Ottawa. , Photographer: Chris Roussakis/Bloomberg

Valens Co., a Canadian marijuana producer, signed a deal to buy Florida-based Green Roads as part of its initial expansion into the U.S.

Valens, based in Kelowna, B.C., will acquire the company for US$40 million in cash and stock, plus US$20 million if earnings-based targets are met, a spokeswoman for the company said.

Green Roads sells products with cannabidiol, or CBD -- the non-psychoactive compound in the marijuana plant -- online and through 7,000 retail locations. The deal will allow Valens to immediately enter the U.S. CBD market. The combined company would have had sales of $111.6 million (US$90 million) in 2020. Valens generated revenue of $83.8 million in its last fiscal year.

“We evaluated what would strategically make the most sense as our first piece of the puzzle in our U.S. market strategy,” Valens Chief Executive Officer Tyler Robson said in a statement. This deal will help us “create an attractive platform in a growing health and wellness market.”

The deal is expected to be accretive to earnings in 2021, Valens said. The Green Roads brand had the second-largest share of the U.S. CBD market in last year’s third quarter, according to the companies.

The transaction is part of an ongoing wave of consolidation in North America. Marijuana remains illegal at the U.S. federal level, which hampers growth in many ways, including making it difficult to access traditional funding. But with Democrats in power, there’s more speculation that regulations will be relaxed.

Meanwhile in Canada, where marijuana has been federally legal since 2018, sales for many companies in the industry have missed projections and caused declines in stock prices. That’s driving more deals, with Canadian companies seeking access to the larger U.S. market. Valens reported a 37 per cent drop in revenue last quarter.