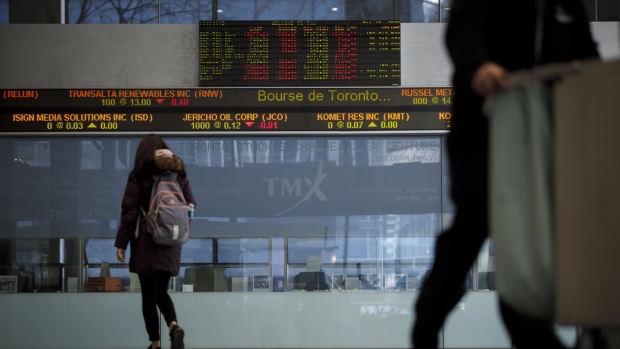 Canadian stocks closed out their best year in over a decade amid a rebound in oil prices, despite the S&P/TSX Composite Index dipping on the last trading day of 2021.

The benchmark rose 22 per cent this year, its best annual performance since a roughly 31 per cent rise in 2009. It was buoyed by a resurgence in energy stocks, which had underperformed for several years but rebounded in 2021 along with crude prices as demand bounced back from the pandemic.

“Coincidentally, (2009) was the year coming out of the last bear market,” said Craig Basinger, chief market strategist at Purpose Investments Inc. in Toronto, referring to the recovery that followed the 2008 financial crisis. Basinger said Canada’s benchmark index performs well during economic rebounds, and did so again this year as the world recovered from the initial outbreak of the COVID-19 pandemic. 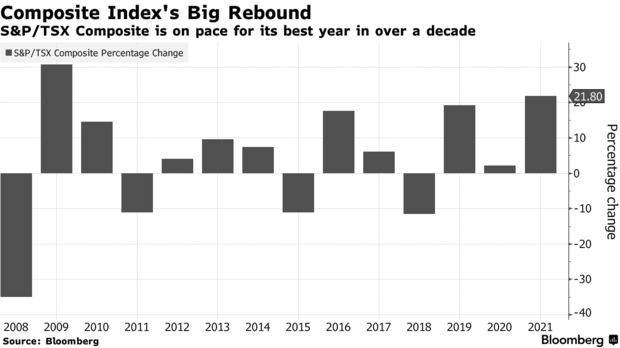 Despite its best year in over a decade, the key Canadian index still underperformed its U.S. counterpart by about five percentage points. The S&P 500 Index rose 27 per cent and posted 70 record highs in 2021.

Canada’s financial and energy industries account for the majority of the rise in the Composite index this year, said Jeff Mo, portfolio manager with Mawer Investment Management in Calgary. “It’s a very narrow universe, where you have a situation where two sectors are contributing to 75 per cent of the performance,” he said, adding that U.S. equity performance was more broad-based.

Over the course of the year, Canadian energy, real estate and financial sectors outperformed the broader index, while only the health-care sector declined due to falling cannabis equities. Canopy Growth Corp. was the worst performer on the index after falling roughly 65 per cent in 2021.

By contrast, the S&P/TSX Composite Energy Index rose 42 per cent, marking its best year since 2005 when it was up 61 per cent.

Energy companies dominated the top-performing stocks on the Composite this year, occupying eight of the top 10 spots. Baytex Energy Corp. led the group with a 467 per cent return in 2021. The only non-energy companies to rank among the top 10 performers were aerospace firm Bombardier Inc., up 250 per cent to rank as the fifth-best return on the index, and cyrptocurrency miner Hut 8 Mining Corp., which is up roughly 185 per cent and ranked ninth.

This year also marks the largest positive net change for the Composite Index, which rose 3,789 points to 21,222.84 -- dwarfing the previous largest net gain of 2,758 points in 2009. The largest net change or percentage change ever was during the financial crisis of 2008 when the S&P/TSX Composite fell by 4,845 points, or 35 per cent.