Canadian stocks dropped for a fourth straight day, closing on the brink of the first correction since 2020, as investors exit risk assets on concerns about rate hikes and slowing economic growth.

The S&P/TSX Composite Index closed 0.6 per cent lower on Tuesday after Federal Reserve Bank of Cleveland President Loretta Mester said 75 basis-point rate hikes from the Fed cannot be ruled out if inflation doesn’t come under control. The Canadian equity benchmark has dropped 9.95 per cent from its record closing price reached on March 29. (A 10 per cent decline is considered a correction.)

Commodity producers, financial stocks and tech were among the biggest drags on the index Tuesday. Suncor Energy Inc. declined 1.3 per cent, while Shopify Inc. fell 1.7 per cent. Bausch Health Cos. also weighed on the TSX, sinking 27 per cent after the company reported earnings that largely missed analysts’ expectations.

“Market psyche has shifted from concerns about rising interest rates into a broader-based selloff due to fears of a hard landing or recession,” Lesley Marks, Mackenzie Investments’ chief investment officer of equities, said in an interview. 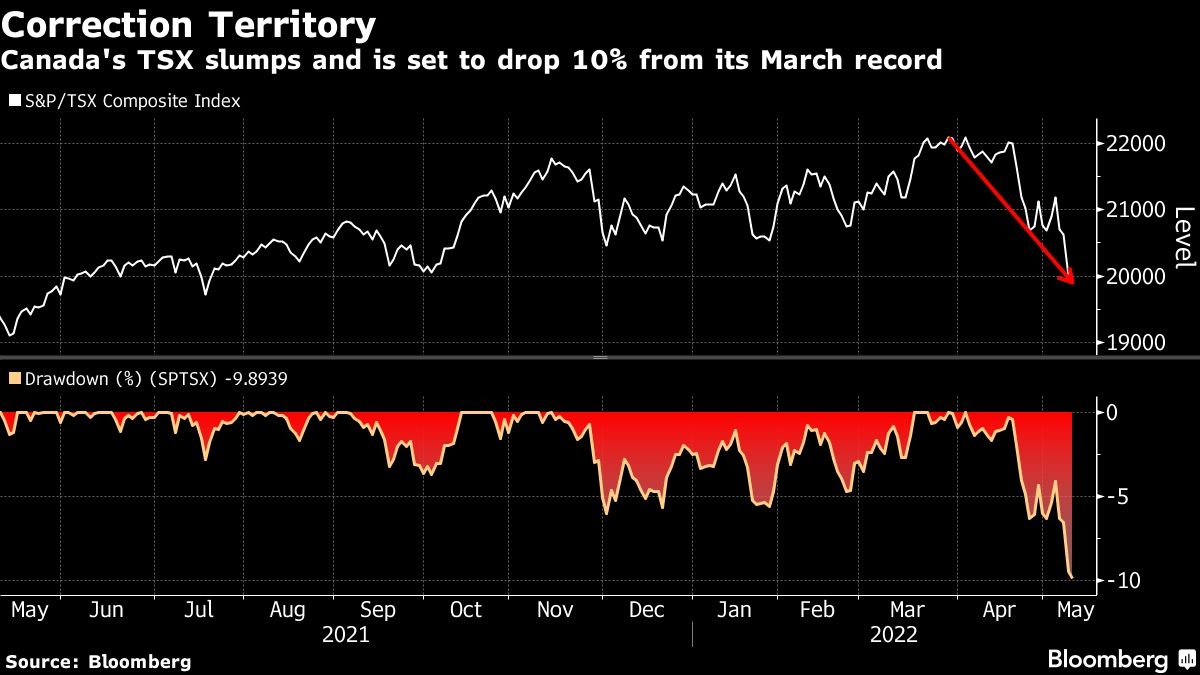 The Canadian market has so far avoided the steep losses seen in the U.S., falling 6.3 per cent this year compared with the 16.1 per cent drop in the S&P 500 Index. Investors had been piling back into commodities stocks -- which make up about a third of the Canadian index -- as markets reacted to a tight oil market, economic uncertainty and rising rates.

With nearly half of Canadian companies set to report in the coming weeks, analysts remain bullish on earnings. Canada’s Big Six banks, making up about 20 per cent of the benchmark, are set to report in late May. Financial stocks have dropped 4 per cent in the past four days.