Expect a very difficult summer for the stock market: Strategist

Canadian stocks plunged in the market’s worst week in more than two years as investors fled riskier assets amid deepening concerns that red-hot inflation could trigger a recession.

The S&P TSX Composite Index fell 0.4 per cent on Friday, extending losses to tumble 6.6 per cent this week, the gauge’s biggest drop since March 2020 when the pandemic devastated global markets. While Canada’s benchmark index has staved off the steep losses of many indexes, companies in the energy, utilities and materials sectors saw the biggest declines across all sectors as central banks hiked interest rates in an attempt to tamper inflation.

“What has hurt Canada is that finally we’re seeing the market start to price in a recession, even for the most cyclical, inflation sensitive stocks like energy,” Edgehill Partners Chief Investment Officer Jason Mann said in an interview. “Energy was the last place that people were hiding. It’s been a rolling bear market where nothing is safe.” 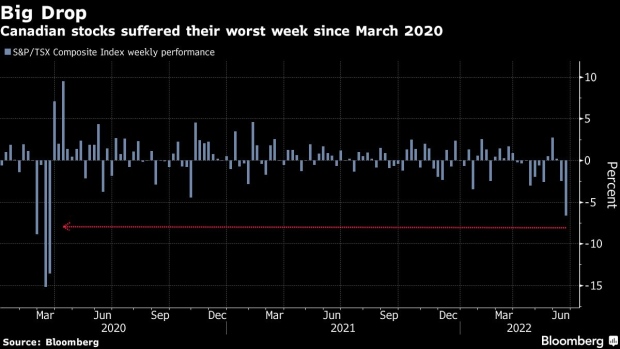 Oil and gas stocks, which have helped bolster the S&P/TSX this year, tumbled 14 per cent this week. Canadian Natural Resources Ltd and Enbridge Inc. fell 17 per cent and 9.5 per cent respectively, with both posting their worst weeks since March 2020. Miners and utility companies both dropped more than 6 per cent.

Investors fled the equity markets this week, dragging the S&P 500 Index into its first bear market since March 2020 on Monday. The sell-off worsened on Wednesday when the US Federal Reserve raised interest rates by 75 basis points, the biggest increase since 1994.