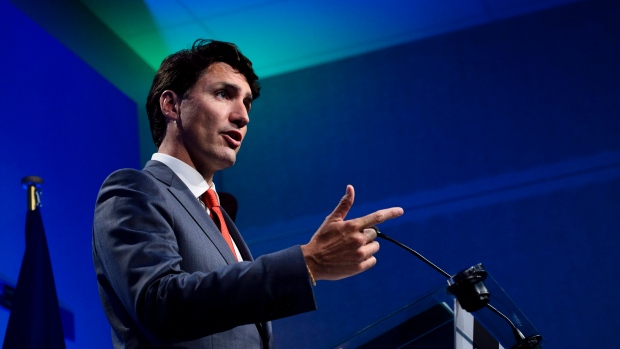 Justin Trudeau kept up his optimism for a renewal of NAFTA, and praised Canadians for showing solidarity during tensions with the U.S.

“We know we are going to be able to get to a good trade deal that is beneficial to Canada, to Mexico and to the United States,” the prime minister said Tuesday in Antigonish, Nova Scotia, where he was attending a community cookout. “We are going to do it by staying strong and united, and being there for each other when we are hitting challenges. So thank you to Canadians.”

Trudeau didn’t mention any specific areas of progress or stumbling blocks during his brief remarks at St. Francis Xavier University. Earlier this month Canada retaliated against the U.S. for tariffs on steel and aluminum, after giving President Donald Trump’s administration a month to reconsider. Trudeau and his foreign minister Chrystia Freeland have said disputes such as those over metals and lumber should remain separate from work on a new North American Free Trade Agreement.

The Liberal prime minister has solid support for his handling of Trump and the trade file ahead of the scheduled general election next year. A poll conducted last month by Nanos Research on behalf of Bloomberg found 41 per cent of Canadians said Trudeau is the best party leader to deal with the White House, compared with 20 per cent who said Conservative Leader Andrew Scheer would be best-suited.

Trudeau met earlier with Nova Scotia Premier Stephen McNeil, head of the provincial Liberal Party. The prime minister said the broad support he’s received from Canadians on trade has been helpful during negotiations.

“We have all stood together during the trade conversation with the United States,” he said. “We know that staying strong, leaning on each other, being there to defend the interest of Canadians, is what we do.”