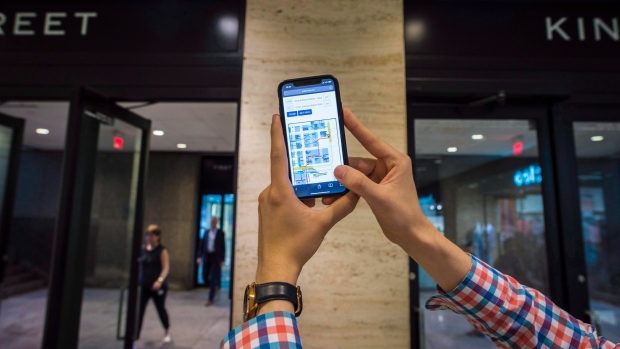 A website which maps out the PATH system is displayed on a cellphone in Toronto, July 9, 2018. The Canadian Press/Tijana Martin

Complaints against telecom and cable companies rose by 35 per cent last year to hit a record high as an upward surge in disputes continued for a second straight year, says the consumer agency tasked to deal with them.

The Commission for Complaints for Telecom-Television Service said Thursday in its annual report that it received 19,287 complaints in the fiscal year ending July 31, up from the 14,272 received the year before and more than double the amount from two years earlier.

The number of complaints come from a variety of factors, including increased awareness of the agency and rapid change in the industry, said CCTS commissioner and CEO Howard Maker.

"The more things that they try, the more changes that they make, the new technologies, they all leave opportunities for problems," he said in an interview.

"Problems with explaining how this works to customers, how things interact with each other, especially on the wireless side, how their pricing and promotions work, all of those things tend to generate complaints."

The commission, mandated by the CRTC but funded by the industry, also factored in a full year of television complaints for the first time after adding the category the year before.

Telus, however, saw a 71 per cent jump in concerns raised, while Rogers saw a 26.5 per cent increase and Bell a 24.2 per cent rise.

Vancouver-based Telus said it saw an increase following a price rise for some off-contract plans and has since simplified its contract language.

"We heard from a lot of customers who were frustrated with our pricing and they said the contract was difficult to understand. We embraced this feedback," said Tony Geheran, chief customer officer at Telus in a statement.

Bell Canada's ratio of complaints to total subscribers was much higher than its two nearest rivals, but spokesman Marc Choma said in a statement that the company's share of complaints were down for the fourth year in a row.

"We have further to go but we've invested significantly in service and are seeing continued improvement," he said.

The CCTS says wireless services were the main areas of complaints, followed by internet-related problems, while the main issues in the complaints were billing and contract disputes.

The commission says the leading complaints were about billing, including customers charged but not provided service, billed after service cancellation, and promised discounts and promotions not honoured.

Contract complaints include being provided the wrong internet package, not disclosing information or notices as required, and issues with contract terms and prices.

It says the 158 confirmed breaches of the wireless code was up 42 per cent from a year earlier. The code was implemented in 2013 and sets out rules on areas like contract clarity and bill management.

Bell Canada accounted for 29.1 per cent of code breaches, Telus and Rogers were tied at 19.6 per cent of them, and Freedom Mobile made up 15.8 per cent. Fido, Virgin, Videotron and Chatr also recorded breaches.

The commission noted that despite the record number of overall complaints, 182 service providers had zero complaints, and another 107 had three or less.

Rogers, which has seen its complaint volume vary significantly in recent years, said it continues to work to improve its customer experience.