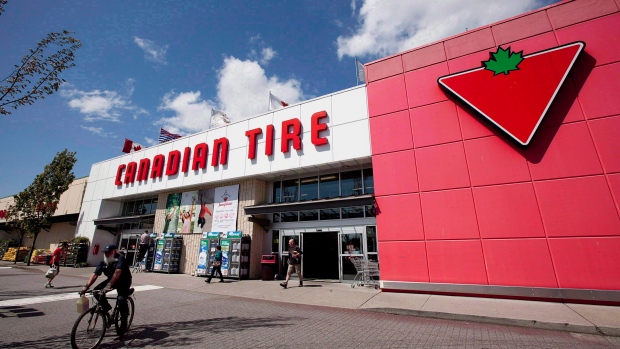 A man cycles by a Canadian Tire store in North Vancouver. , The Canadian Press

Desjardins Capital Markets analyst Keith Howlett is telling Canadian Tire to get its act together on the e-commerce front.

In a note to clients, Howlett said the demise of Sears Canada increases the urgency for Canadian Tire to accelerate its digital push, as it will no longer have a weak big-box-competitor to steal sales from.

“Both Canadian Tire stores and Mark’s stores compete directly in some categories with Sears Canada,” Howlett wrote. “More importantly, 2018 is the year that Canadian Tire has to finally swim proficiently in the e-commerce pool, including in the deep end (delivery to home in all banners).”

In its latest earnings release, Canadian Tire emphasized the need to make deeper inroads online in order to reach its three per cent retail sales growth target at its flagship banner. The retailer is targeting even more aggressive growth in its FGL Sports division, which includes Sport Chek.

“This is particularly important at Sport Chek, given the online penetration of U.S. peers such as Foot Locker and Dick’s, and the rapidly growing direct-to-consumer sales by key brand owners such as Nike.”