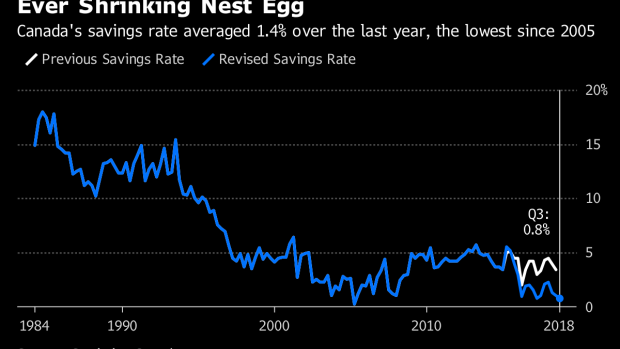 (Bloomberg) -- The savings rate in Canada has dipped to the lowest in more than a decade, a sign consumption driven growth may be nearing an end.

Statistics Canada reported Friday the household savings rate, which represents the proportion of disposable income that remains after spending, fell to 0.8 percent in the third quarter, the lowest level since early 2017. It’s averaged 1.4 percent over the past year, the worst on an annual basis since 2005.

The low rate leaves Canadians more vulnerable to an economic shock, according to Brian DePratto at Toronto-Dominion Bank. “It’s concerning that households aren’t building up buffers and prepping for retirement like they used to,” the Toronto-based senior economist said by email. “The extent to which Canadians turn around their priorities when it comes to their financial situation could also mean less money for consumer spending.”

The statistics agency made revisions to account for income as reported by the Canadian Revenue Agency. Those revisions shifted the average rate of savings in data back to early 2016 downward to 1.4 percent, from 3.6 percent previously.

To contact the reporter on this story: Erik Hertzberg in Ottawa at eschmitzhert@bloomberg.net

To contact the editors responsible for this story: Theophilos Argitis at targitis@bloomberg.net, Chris Fournier, Stephen Wicary