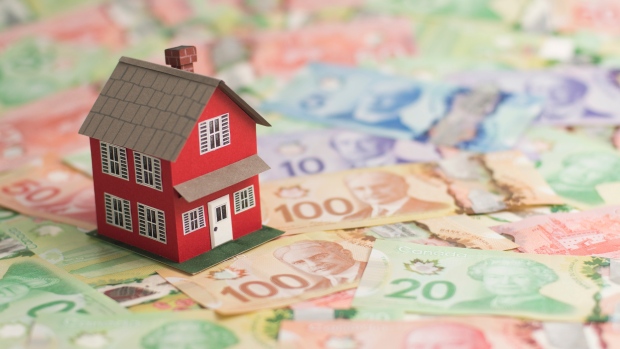 (Bloomberg) -- Canadians are borrowing against their houses at the fastest pace in more than five years, as home equity lines of credit emerge as a preferred means of accessing funds.

Balances of non-mortgage loans to individuals for non-business purposes, secured by residential properties, a category that includes helocs, jumped 7.2 percent in December from a year earlier, the fastest annual growth since 2012, reaching a record C$230 billion ($184 billion), according to data published Thursday on the website of the Office of the Superintendent of Financial Institutions.

Borrowers can tap helocs for up to 65 percent of the value of their homes, and the funds are most commonly used for making renovations, investing and consolidating debt, according to a June 2017 report by the Financial Consumer Agency of Canada. “Houses are becoming piggy banks,” said Paul Gulberg, a Bloomberg Intelligence analyst. It’s “either greed based or need based.”

Helocs can also be a red flag for policy makers.

It’s a type of borrowing that may contribute to increased household vulnerabilities because it typically doesn’t require the principal to be repaid on a fixed schedule, the Bank of Canada said in its most recent financial system review. About 40 percent of heloc borrowers don’t regularly pay down the principal.

Of total non-mortgage loans secured to individuals for non-business purposes, those secured by residential property represent about 46 percent, the data show.

Compared to other loan types, such as auto loans and credit cards, rates on helocs are typically cheaper, making them more attractive to consumers. They also tend to be more sensitive to fluctuations in borrowing costs, because they’re usually tied to prime rates.

“It’s a rising risk factor because it’s something that reprices more rapidly than a typical mortgage pool,” said Gulberg, adding the risk is rising “in conjunction with the fact that it’s fueling overall consumer credit, which is considered to be an issue.”

Canadians have about 3 million heloc accounts and the average outstanding balance is C$70,000, the FCAC said, which also warned heloc borrowers are increasingly vulnerable to rising interest rates and a housing market correction.

(Corrects second paragraph to show helocs are included in the category of loans secured by residential property.)

To contact the reporter on this story: Erik Hertzberg in Ottawa at eschmitzhert@bloomberg.net.

To contact the editors responsible for this story: Theophilos Argitis at targitis@bloomberg.net, Erik Hertzberg, Stephen Wicary