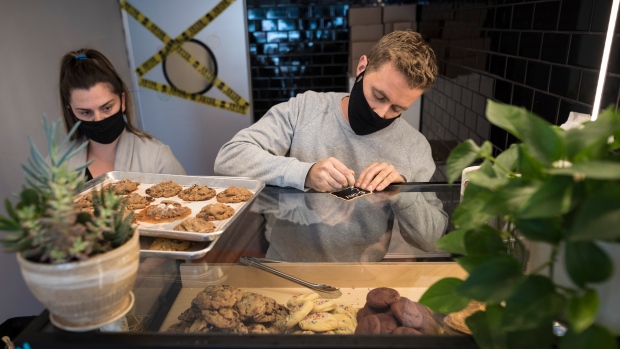 Chelsea Hearty, left, and Ian Moores, the proprietors of Courage Cookies, prepare to open their pop-up shop in Toronto on Saturday, October 24, 2020. , THE CANADIAN PRESS/Tijana Martin

TORONTO -- For Chelsea Hearty and Ian Moores, the recipe for success began with a midnight snack.

When the COVID-19 pandemic hit in March, Hearty and Moores, who had worked in food and hospitality, were among the hundreds of thousands of workers who found themselves out of a job and with little to do during lockdown.

Moores decided to fill some time -- and a late-night sugar craving -- by baking. He got off the couch and put on an apron with a mission to make "the best cookie anyone's ever had."

After about an hour of tinkering with a family recipe, Moores had baked up what Hearty described as a "perfect little angel pillow" of a treat.

A few bites in, Hearty and Moores knew they had a buttery hit on their hands.

"We've always wanted to work for ourselves," said Moores. "This was our opportunity to do that."

As the pandemic prompts employers to slash jobs, a number of crafty Canadians are turning their hobbies into "side hustles," supplemental sources of income that often double as a creative outlet.

From thrifting to mask-sewing to jewelry-making, almost any artisanal enterprise can find a customer base online.

Etsy Canada, an online marketplace that's popular for side businesses, says new shop openings increased by more than 250 per cent during its most recent quarter, compared to the same period last year.

Some critics see side hustles as a symptom of a precarious labour market that leaves workers with no choice but to enter the gig economy.

But business owners like Hearty and Moores, whose snack led them to found Courage Cookies, credit the pandemic with giving them the push to abandon the daily grind for a shot at self-made success.

The "angel pillow" was the first flavour in their Courage Cookies repertoire. The operation has since expanded from the best-friends-turned-business-partners' kitchen into an online delivery business operating out of a commercial space, and a semi-permanent pop-up store at Toronto's Stack'd market.

The pandemic brought Jamie Rajf's career in the music industry to an abrupt halt. But it also pushed her to follow a childhood passion for hunting down "treasures" in unlikely places by opening up an online vintage shop.

Since launching Good Day Vintage, an Instagram business operated out of her Toronto home, in August, Rajf said she's sold most of her inventory, turning a profit of a few thousand dollars.

"I have really learned from this that it's important to have something that you work on that you have total control over," said Rajf, who found full-time employment over the summer. "I can get out of it what I put into it, as opposed to working for someone else."

Jeff Donaldson, a doctoral candidate at Carleton University's School of Public Policy and Administration, said today's workers need multiple streams of income as a form of "insurance" against industrial disruption.

"Side hustles are not meant to replace your main source of income," said Donaldson, who specializes in emergency preparedness. "They're meant to provide insulation."

Shauna Brail, an associate professor at the University of Toronto's Institute for Management and Innovation, noted that while some side hustles are passion projects, others are "survival jobs."

"These are often short-term solutions, particularly for those ... who haven't necessarily chosen to work in the gig economy," said Brail. "In a way, it's chosen them, because it's the last possible option."

She pointed to women in the workforce who have shouldered the brunt of the economic fallout of the pandemic, particularly mothers who have been tasked with taking on extra caregiving duties.

Statistics Canada reported last month that employment among mothers with school-aged children had nearly returned to pre-shutdown levels. But the agency said the number of mothers working less than half their usual hours in September was still 70 per cent higher than before the pandemic in February.

Brail noted that many popular side hustles, such as mask-sewing and cooking, capitalize on what is traditionally treated as women's unpaid domestic labour.

Michelle Eaton, vice-president of public affairs at the Ontario Chamber of Commerce, joins BNN Bloomberg to discuss how to improve labour force participation for women impacted by the pandemic.

As Azure Johnson stitches together a sewing business from scratch, the mother of four has been thinking about what she's lost and what she's gained since March.

Johnson, who is Plains Cree from the Samson Cree Nation in Maskwacis, Alta., said her identity was wrapped up in her work helping vulnerable people build life skills at an Edmonton non-profit.

But when the shutdown left her without childcare, Johnson made the difficult call to take a leave of absence so she could look after her boys.

Then, Johnson ran into a problem that would lead her toward a financial solution.

Her right ear isn't fully developed as a result of a congenital condition, so she can't wear traditional masks. Instead, Johnson pulled out her sewing machine to create masks that tie at the back of the neck.

At first, she sold the masks to family and friends, then word got around she was making face coverings for people who needed different styles and sizes.

Customers started placing so many bulk orders that her sewing machine couldn't keep up, Johnson said, so she found a distributor. By late October, she estimates she'd sold a total of about 8,000 masks.

But Johnson didn't stop there. She'd always had a flair for putting an "Indigenous twist" on familiar items. And her sons, who had dutifully helped her sew, trim and sweep, had some ideas of their own.

Azure and Co. has grown into a family business offering products ranging from teddy bears clad in traditional prints to T-shirts encouraging Indigenous men to take pride in their braids.

When she left her job, Johnson felt like she lost her "position in the community." But she's since found other ways to give back, including volunteering and making specialized masks for First Nations schools.

It's not the same as what she had, but it is her own, and Johnson is looking forward to seeing where Azure and Co. can take her.

"I've come to a point where I think it just may be a choice for me to actually not return to work nine-to-five," she said. "I'll just do my own thing and help in my own lane."