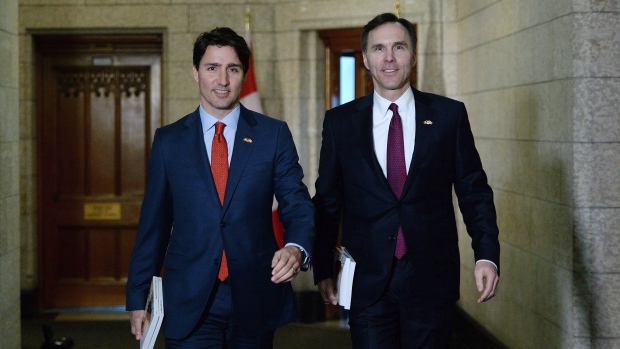 Canadians are still concerned about the deficit as the next federal budget announcement nears, according to a new poll.

In an Angus Reid Institute survey released Monday, deficits and federal spending ranked third among the ‘most important issues facing Canada today,’ trailing only ‘the economy’ and ‘health care’. The issue was cited by 22 per cent of the 5,400 Canadians polled.

In contrast, only 12 per cent of respondents in a Dec. 2015 Angus Reid poll listed the deficit and government spending among their chief concerns.

The swing can largely be attributed to the realities of deficit spending coming to fruition.

“It’s interesting how the pendulum swings,” Angus Reid Executive Director Shachi Kurl told BNN.ca. “There was a time in Canadian political rhetoric when deficit spending was the most evil thing a politician could do. … Justin Trudeau changed the game politically in the last Federal election by saying: ‘I’m going to run deficits,’ saying it openly and talking about a modest $10 billion deficit and making the argument that this would make lives better for working class Canadians.”

“Fast forward a year and a half and what you’re finding is that people are far less comfortable with the amount and the level of deficit spending that we are seeing.”

Trudeau was most popular in Atlantic Canada with 73 per cent approval in Newfoundland and Labrador and a 26 per cent ‘approve strongly’ showing in Nova Scotia.

Kurl believes that spending is partly to blame for the dip in Trudeau’s popularity since his election, but that he’s also experiencing the end of a “very sweet and quite extended” honeymoon with Canadians.

“I think that I had always imagined that it would simply be the business of getting down to governing and getting down to the job at hand that would start to  chip away at those sky-high approval ratings and that’s what’s happening.”

She pointed to the government’s handling of trade, the economy, energy, relations with the U.S. and climate change as “big hurdles coming up that this government’s going to have to clear.”

Similarly, 23 per cent of respondents nationwide expected their standard of living to be worse a year from now.