It’s a positive sign for the economy, at a time of otherwise high anxiety for the nation’s households. Consumer sentiment -- a good barometer of growth -- has been at depressed levels for more than a year, suggesting dim prospects for a sustained rebound.

While economic pessimists typically outnumber optimists, the difference between the two groups continues to be higher than the historical average. That said, the gap narrowed last month to the least since November. 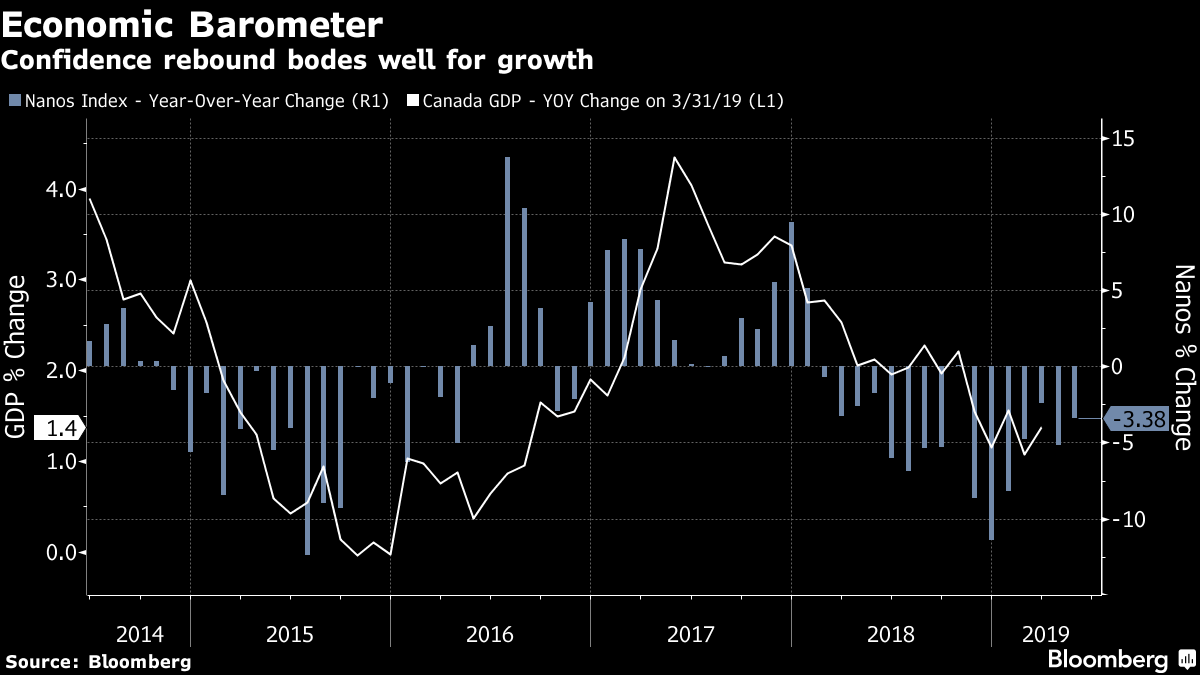 The improvement probably reflects the impact of President Donald Trump’s decision to lift metals tariffs on Canada, a move that’s expected to help clear a path toward ratification of a new North American trade deal. However, the polling was undertaken before Trump’s unexpected vow late last week to combat illegal immigration by imposing escalating tariffs on all Mexican goods.

The Bloomberg Nanos Canadian Confidence Index -- a composite indicator calculated from the rolling averages of the four questions -- ended May at 55.5, up from 54.9 at the end of April. While that’s the highest end-of-month reading in 2019, the confidence index has remained close to current levels for most of this year, after plunging in 2018.

Canada’s economy is undergoing one of its most sluggish periods in the past decade with growth at a near halt, weighed down by last year’s sharp decline in oil prices and growing global trade tensions that have curtailed business investment. Home owners have also been rattled by a slowdown in real estate markets, particularly Vancouver and Toronto.

The survey shows that in addition to waning pessimism about the economy, Canadians are more optimistic about the prospects for real estate, with just over 40% expecting prices to rise over the next six months, the highest reading this year.

Better numbers for the economic outlook and real estate were offset by worsening scores on job security, the data found.

Regionally, households in Quebec remain the most optimistic while those in Alberta and other prairie provinces report the most pessimism.