The pandemic real-estate boom has made some Canadians richer, while others languish.

The net worth of the nation’s households increased by about $770 billion (US$633 billion) in the first three months of 2021, a record 6 per cent gain, to $13.7 trillion, Statistics Canada said in a report Friday. Since the start of 2020, that figure has increased by more than $2 trillion, largely thanks to rising home prices.

But the data also show that windfalls are going largely to homeowners and older Canadians. Households that own their home accounted for almost all of the gains in the first quarter -- $730 billion. The wealth of renters was up just $43 billion. That disparity also comes as rising home values make owning increasingly out of reach for many Canadians. 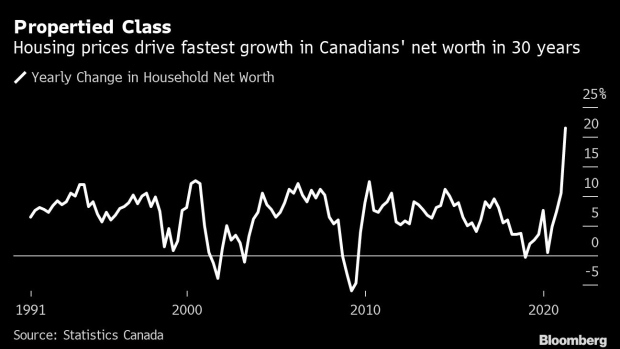 “The numbers speak to exacerbating wealth inequalities, because we also know that it is becoming even more difficult for renters to get into the housing market,” Jimmy Jean, chief economist at Desjardins Securities, said by email. “The financial burden of owning a property is now untenable for many.”

Household net worth spiked 21.5 per cent in the first quarter from a year earlier, the largest gain in records to 1990. That’s more than triple the historical average of 6.8 per cent yearly gains.

Those with a major earner 55 or older held $1.1 million in net worth at the start of the year, versus $260,000 for households whose primary breadwinner was under 35, the agency said.

The further widening of the wealth gap from housing could feed demands for Prime Minister Justin Trudeau and other levels of government to tackle housing affordability issues.

National net worth --- which includes government and corporate wealth -- jumped by over $1 trillion, reaching $15 trillion at the end of the first quarter.

“The growth of financial assets has not kept pace with that of real estate, resulting in a higher concentration of wealth in non-financial assets,” Statistics Canada said in the report.