Four months before an election, Canadians remain split on whether they see Prime Minister Justin Trudeau or his main rival, Andrew Scheer, as the best manager of the nation’s economy.

Asked which leader they trusted to support growth, 30 per cent of Canadians picked Trudeau and 29 per cent chose Scheer, according to a survey this week by Nanos Research Group for Bloomberg News. About a quarter of respondents didn’t trust any of the leaders or were unsure, with the rest trusting leaders of smaller parties.

The results show neither leader has been able to wrest the advantage on the crucial question of economic stewardship that is typically a key driver of votes. That suggests the race remains wide open for the October vote that will decide if Trudeau wins a second mandate.

“Whoever has the advantage here will have a significant advantage going into the election,” said Nik Nanos, chairman of Nanos Research. “And one out of every four Canadians are still hypothetically up for grabs.” 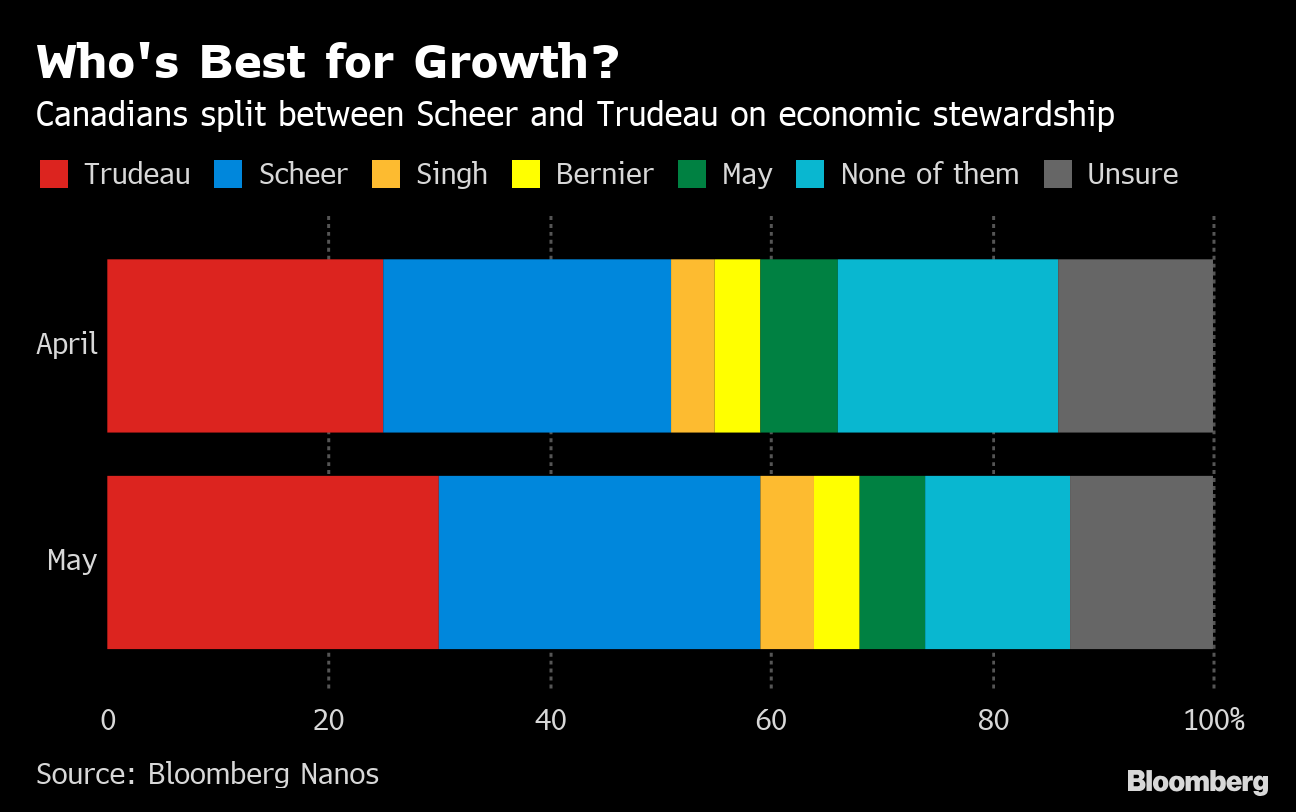 The wide lead in the voter intentions the incumbent Liberals once enjoyed has evaporated this year amid a scandal over allegations of judicial interference by Trudeau’s staff. Aggregate polls maintained by the Canadian Broadcasting Corp. show the prime minister’s party with 30% support, trailing the Conservatives under Scheer at 34%.

This week’s survey on economic management -- which took place from May 31 to June 4 -- did show trust in both leaders rising over the past month, keeping their statistical tie intact. Trudeau’s score jumped 5 percentage points from similar polling at the end of April, while Scheer recorded a 3 percentage point gain.

Trudeau may have gotten a lift from President Donald Trump’s decision to lift metals tariffs on Canada, a move that’s expected to help clear a path for the ratification of the new North American trade deal. The impact of the steel tariff move is already being reflected in stronger consumer confidence numbers.

Scheer, meanwhile, has begun to lay out elements of his economic platform, including a plan to make the country oil independent within 10 years.

The leaders of four smaller parties received support from a combined 16% of respondents. Another 13 per cent said they didn’t trust any leader, while 13% said they were unsure.

Trudeau was solidly ahead in Atlantic Canada and Quebec, and the two leaders were statistically tied in Ontario and British Columbia. Ontario and Quebec are Canada’s most populous regions and will largely determine who wins government.

Scheer had a wide lead in the energy-rich Prairies, where he has tried to cast himself as a champion of the oil sector. He led Trudeau there 38% to 21%, the survey found.

Nationally, there is a wide gender gap between the two leaders. Scheer is ahead of Trudeau by a margin of about 10 percentage points among men, while Trudeau has a similar lead among women.

The poll is considered accurate within 3.1 percentage points, 19 times out of 20.