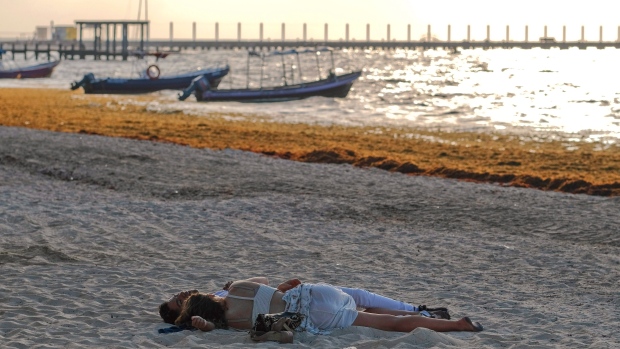 A couple sleeps on the sand on the beach where sargassum seaweed is present in Playa del Carmen, Mexico, at sunrise Wednesday, May 8, 2019. , AP Photo/Victor Ruiz

For years, Cancun has relied on a simple formula -- cheap beer, brilliant sunshine and pristine Caribbean beaches -- to lure tourists by the millions.

But for the past several months, the last part of the equation has been stained by an invasion of seaweed-like algae. Thousands and thousands of tons of it have been piling up in Cancun and dozens of nearby beaches in the Yucatan Peninsula, such as Tulum, Playa del Carmen and Holbox. Not only is the slinky, slimy brown stuff an eyesore, but it reeks – like rotten eggs, many say.

The phenomenon is putting a dent in Cancun's tourism business, another blow to a Mexican economy that's already teetering on recession. Hotel occupancy in Cancun fell 3.4 per cent in the first three weeks of June. Some places are offering discounts on rooms of as much as 20 per cent and transporting guests to unaffected beaches.

Air traffic to Cancun registered a measly 1.2 per cent increase in June, the weakest growth for the month since 2011, and investors have been dumping shares of Cancun airport operator Grupo Aeroportuario del Sureste for months. The stock is down more than 10 per cent since the end of January.

Tourism is the backbone of the region’s economy. In 2017, almost 90 per cent of the gross domestic product of Yucatan Peninsula’s Quintana Roo state came from the service sector. In Cancun, almost 40 per cent of jobs are directly related to the tourism industry, according to a 2018 study by the World Travel & Tourism Council.

Mexican President Andres Manuel Lopez Obrador has repeatedly downplayed the seaweed invasion. He calls the problem “controllable'' and has thrown very little money -- a mere US$2.6 million for seaweed removal -- at it. But with no sense of when the onslaught of the algae, known as sargassum, will end, others are much more worried. The Quintana Roo Hotel Association estimates a drop of about 10 per cent in future reservations for the entire state.

"What’s important is that this problem is not going to go away,'' said Valeria Romo, an analyst at Invex Casa de Bolsa. “There’s no long-term solution in sight.''

While not new, the waves of algae have exploded in recent years. Red tide, which is made up of another type of algae, ravaged Florida's coast in 2018, killing fish and releasing toxins that cause respiratory symptoms in humans similar to tear gas. The Caribbean, Gulf of Mexico and Florida have been plagued with the sargassum algae for several years. Using satellite images, scientists at the University of South Florida discovered earlier this month the largest bloom of the algae in the world, which has now been named the Great Atlantic Sargassum Belt.

There's no consensus on what's causing the problem. Some scientists have cited climate change and its impact on precipitation and ocean circulation. Another possible reason: An increase in deforestation and fertilizer used in Brazil’s Amazon, which flows into the ocean, according to preliminary data from the South Florida study. The nutrients in fertilizer quicken the growth of the algae.

“The ocean’s chemistry must have changed in order for the blooms to get so out of hand,” Dr. Chuanmin Hu of the USF College of Marine Science said, in the release presenting the study.

Crews work constantly to try to contain the blooms. On one recent morning in Playa del Carmen, they could be seen using a front-loader to shovel it into a truck that took it to a main pile for pick up. This provides only temporary relief, however. Areas that take hours to clean end up are covered in sargassum only hours later.

As tourists stay away, angst among local business owners is mounting. “Summers are generally slow,” said Mariana Padilla, owner of a café in Tulum. “But this year the drop was much more pronounced compared to last year.”