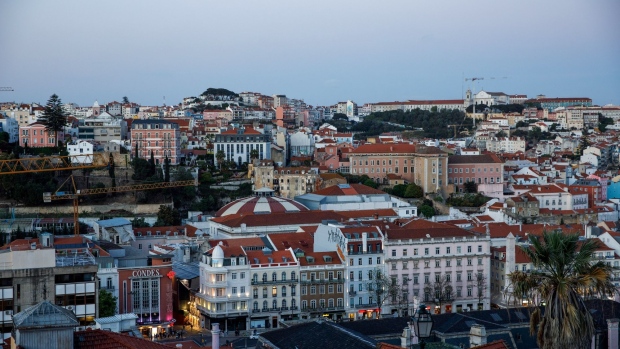 Residential and commercial buildings on the skyline of downtown Lisbon, Portugal on Wednesday, April 27, 2022. The Portuguese capital has become a magnet for international property investors, attracted by the city’s mild temperatures and tax incentives. , Bloomberg

(Bloomberg) -- Aggregate Holdings SA is in talks to take its Portuguese unit Vic Properties public in a merger with BurTech Acquisition Corp., a blank-check firm, according to people familiar with the matter.

The talks are the latest effort by the German real estate firm led by Cevdet Caner to sell assets and cut debt after it was embroiled in short-seller allegations of fraud against Adler Group SA. The parties have signed a letter of intent, said the people, all of whom requested anonymity as the talks are private.

The SPAC has been discussing a potential equity value of more than $300 million for Vic, a figure that could rise if certain performance targets are met, some of the people said. The eventual enterprise value of the combined entity could be even higher after including proceeds from a potential PIPE offering and the SPAC’s remaining cash after any redemptions, the people said.

A deal hasn’t been finalized and it’s possible talks could collapse.

Representatives for Aggregate, Vic Properties and BurTech declined to comment.

Aggregate has been forced to slash assets to raise funds as it struggled to stem the drop in its bond prices after short seller Viceroy Research accused Adler of systemic fraud. Aggregate was Adler’s biggest shareholder until it lost the bulk of its stake in a margin call earlier this year.

Aggregate commissioned law firm Hogan Lovells to draft a report as it sought to counter Viceroy Research’s accusations of wrongdoing in certain real estate deals with Adler and about the role of Caner. The law firm found no evidence of wrongdoing.

Aggregate had been seeking to refinance debt at Vic Properties earlier this year with the help of Oaktree Capital Management. As the deal stalled, it asked its bondholders to postpone an optional put date in which they could ask to redeem €250 million of bonds to April.

The BurTech SPAC, led by CEO Shahal Khan, was previously in talks to merge with India’s JetSynthesys, Bloomberg reported in June. It raised $287.5 million in a December 2021 initial public offering.