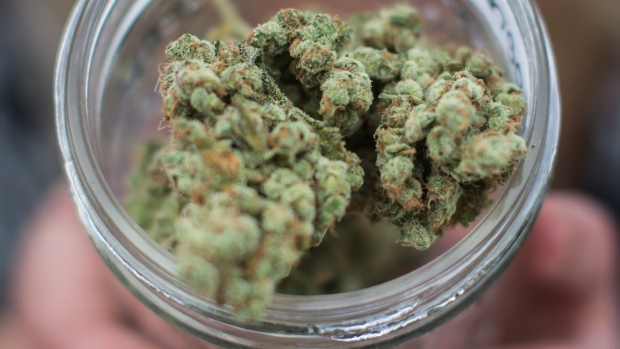 A vendor displays marijuana for sale during the 4-20 annual marijuana celebration, in Vancouver, B.C., on Friday April 20, 2018. , THE CANADIAN PRESS/Darryl Dyck

Cannabis-infused beverages could emerge as a major segment in Canada’s legalized recreational market, accounting for as much as half of all marijuana sales in five years, according to the new chief executive of Green Organic Dutchman Holdings Ltd.

Brian Athaide took over as CEO of Mississauga, Ont.-based Green Organic Dutchman on July 2, after the company’s former CEO, Robert Anderson, stepped down for medical reasons. Athaide told BNN Bloomberg in his first major interview since his appointment that he expects drinks that contain water-soluble cannabis could be a “major disruptor” in both the alcohol and cannabis markets, especially among health-conscious consumers.

“It may not happen in the first year or two, but over time we do see [beverages] becoming the biggest part of the market because of the ease of consumption,” Athaide said in a phone interview with BNN Bloomberg.

“By developing beverages that have the ability to look like an alcoholic drink – that you get the efficacy of it within 10 to 15 minutes and then fade after a few hours – we believe that will lead to a breakthrough in terms of conversation from other types of beverages.”

Compared to other major cannabis producers, Green Organic Dutchman is slightly behind the pack in terms of building out its overall production capacity. The company has a small 7,000 square-foot facility in Ancaster, Ont. that produces roughly 1,000 kg of organic-grade cannabis annually and is currently in the final stages of obtaining permits for another 150,000 square-foot-facility nearby. It has begun construction on another 820,000 square-foot grow-op in Valleyfield, Que., which will also have a 300,000 square-foot beverage processing unit that will be completed by next year, Athaide noted. The company also has retail and production operations in Jamaica and Denmark with an eye on global growth, he added.

Once its  facilities are fully operational, Green Organic Dutchman expects to produce 170,000 kg of cannabis. By comparison, Canopy Growth Corp., the biggest cannabis producer in Canada, has a funded capacity of 325,000 kg, while Aurora Cannabis Inc. expects to produce about 300,000 kg and Leamington, Ont.-based Aphria Inc. estimates it will produce 171,000 kg.

But investors haven’t been swayed by Green Organic Dutchman’s slow start. In May, the pot producer completed one of the largest initial public offerings in the short history of the cannabis industry, raising $132.1 million on the Toronto Stock Exchange. It currently has about $300 million in cash on hand and a market capitalization of roughly $1.3 billion.

“We’re a bit later to the party but we’re not late,” Athaide said. “We’ve talked to all the liquor and cannabis boards in Canada and because we’re going to be the only organic producer of scale, they’ll want to have an organic section in their stores and we’ll be the only ones who can supply that kind of scale.”

Cannabis producers’ ties to the alcohol industry may grow closer after Corona distributor Constellation Brands Inc. invested $245 million for a 9.9 per cent stake in Canopy last year. BNN Bloomberg also reported last month Molson Coors Corp. has been engaged in discussions with several Canadian cannabis companies to invest in them and collaborate on future cannabis-infused beverages in a move aimed at stemming the brewer’s declining beer sales.

“Our goal is to look at all the different verticals in infused beverages; whether that’s in infused waters or organic juices, [or] things that look like alcohol that [do not] have alcohol in it but is infused,” Athaide said.

Athaide also said the company will offer up any excess capacity in its beverage processing facility to “large-scale global beverage players” for partnership opportunities, but he declined to specify if any deals have been signed.

When Green Organic Dutchman is ready to distribute cannabis to the retail market, Athaide said he expects consumers to flock to his company’s premium organic offering, which include terpene profiles. He said the company could charge roughly 25 per cent more for a certified organic cannabis product than its rivals.

“It is still better for you if you start with a product that has never seen [pesticides or synthetic fertilizer],” he said.