Expectations ahead of the launch of Cannabis 2.0 products – those vapes and edibles that consumers were eagerly awaiting – were certainly lofty, so it’s no surprise that they are now coming back down to reality. RBC Capital Markets cannabis analyst Douglas Miehm said in a report to clients Tuesday he expects sales of vapes and edibles in Canada to reach about $250 million this year amid a lag in new cannabis retail openings across the country. Sales of vapes and edibles in Canada should grow to about $1.5 billion by 2022, still well below earlier projections. The RBC forecast is also well below analyst consensus figures that suggest total revenue from Cannabis 2.0 products for the top seven Canadian cannabis companies will reach $608 million.

Shares of Canopy Growth rose more than 10 per cent on the Toronto Stock Exchange on Tuesday following an analyst upgrade from a leading cannabis analyst. BMO Capital Markets analyst Tamy Chen upgraded her rating on Canopy to a “Buy” from “Hold”, while raising the target price to $40 a share from $25, citing an improved sales outlook primarily from the pot giant’s value brands. She noted that Canopy has likely gained some market share in the Canadian recreational market from its “Twd” value brand while expecting its other products should sell well over the coming year.

TerrAscend announced on Tuesday that its CEO Michael Nashat will step down from his role and be replaced by the company’s executive chairman Jason Ackerman on an interim basis. Nashat will continue to sit on TerrAscend’s board and act as a strategic investor to the company. In a statement, Nashat said that Ackerman is well positioned to lead the company as it focuses its business on the U.S. Ackerman previously ran online grocer FreshDirect and serves as a senior advisor for the Boston Consulting Group.

Flowr Corp announced a major C-Suite shakeup late Monday, announcing several executive departures while appointing a new chief financial officer. Flowr said Irina Hossu will be the company’s new CFO, replacing Alex Dann who will remain with the firm until the end of March. Other departures include head of research and innovation Jason Broome, the company’s chief strategy officer Laurence Levi, while Lyle Oberg, Flowr’s chief medical officer, will transition to an advisory role and remain on the company’s board. Flowr’s chairman Steve Klein will assume the chief strategy role, the company said. The departures were linked to “realigning its leadership structure to drive improved operational and financial efficiencies”, Flowr said in a statement.

Cannabis content and information resource Leafly is laying off 54 staff as the company seeks to “realign” itself with current market conditions, according to Geekwire. The website reports that the layoffs come as the company’s new CEO Tim Leslie looks to limit spending and slow down hiring. Of those staff reductions, 33 came from its Seattle headquarters. Leafly also has operations in Baltimore, Austin, and Toronto along with remote workers around the world. Geekwire reports that Leafly’s internet traffic has fallen over the past few months, according to Alexa data.

US$1,316
-- The median price of a pound of cannabis sold or transferred to a Colorado retail store between Aug. 1 and Nov. 30 of last year, according to the Colorado Department of Revenue. 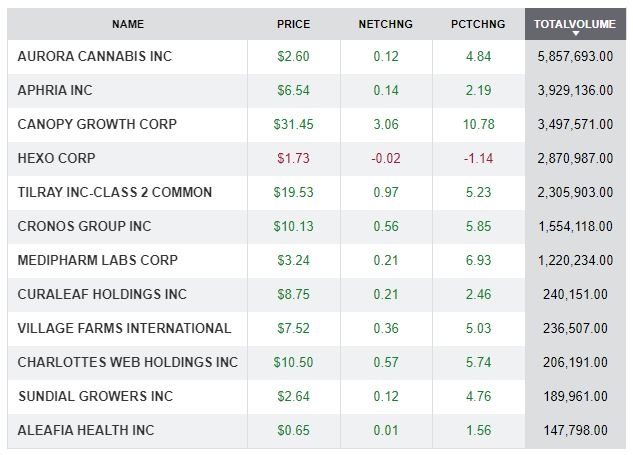