Ontario Premier Doug Ford has some sharp words for cannabis company executives who blamed Ontario for its part in causing an industry-wide slump last year. “Maybe I’ll shoot back a little bit. They didn’t have the supply ready,” Ford said during an interview on BNN Bloomberg Thursday. “Keep in mind it’s only been a little over a year and a bit and we’re opening up to the market.” Ontario currently has 28 legal pot stores open, compared with 402 in Alberta, but provincial regulators have more than 600 applications for new pot shops licences waiting for approval. “We’re going to open up stores,” Ford said. “We’re going to have more stores than all the provinces combined, so we’re going to make everything we can to help the cannabis industry.”

Ontario announced its third-quarter financial results for its fiscal 2019-2020 on Thursday, stating that cannabis represented 0.27 per cent of provincial nominal GDP in 2018. Cannabis household expenditures have averaged a 0.46 per cent share of Ontario’s GDP since 1981, the government said in a release. Total household spending on cannabis in 2018 in Ontario, Canada’s most populous province was estimated to be $2.3 billion, compared to $0.9 billion in 1981, according to Statistics Canada. That represents an average annual growth rate of 2.7 per cent, the Ontario government said.

Sundial Growers is just the latest pot company to undergo sweeping management changes as the Alberta-based cannabis producer looks to cut costs and refocus the company’s operations. Sundia’s CEO Torsten Kuenzlen resigned effectively immediately, and will be replaced by Zach George, who sits on the company’s board. Other company departures announced on Thursday include Sundial’s executive chairman Ted Hellard and chief operating officer Brian Harriman. Hellard will remain on Sundial’s board, while Andrew Stordeur, the company’s head of its Canadian operations, will take on the COO role. Sundial added that it made other operational moves aimed at saving between $10 million to $15 million annually. The company previously announced a round of layoffs where less than 10 per cent of employees would be affected earlier this month.

Meta Growth reports Q1 results, sales down more than 7% from prior quarter

National Access Cannabis, also known by its trade name of Meta Growth, announced fiscal first quarter results late Wednesday where its revenue declined by more than 7 per cent from the prior three-month period. Meta Growth said it made $15.8 million in its Q1, down from $17.1 million in its Q4. Meanwhile, the company posted a net loss of $5.69 million, compared to a loss of $13.8 million in the prior quarter. Meta Growth now has $6.8 million in cash by the end of the quarter, while touting 33 corporately owned and operated cannabis stores across the country. It plans to open two new stores in Toronto within the next few months.

More than 4,600 people submitted responses to USDA ahead of hemp production regulations

A request for submissions by the U.S. Department of Agriculture ahead of the U.S. government agency’s plans to regulate hemp ended on Wednesday, with some notable results, according to Marijuana Moment. The website reports that more than 4,600 individuals and organizations submitted responses to the USDA while more than 1,000 comments were posted on the agency’s website. Several members of Congress, including members from Virginia, Maine and Colorado sent letters to the USDA identifying certain concerns on THC limits as well as harvest testing windows. It’s unknown when the USDA plans to announces its final regulations on U.S. hemp production.

$10 million
-- The amount of net income that the Ontario government made from its cannabis operations in its fiscal 2019-2020, according to the government’s fiscal third-quarter financial results. 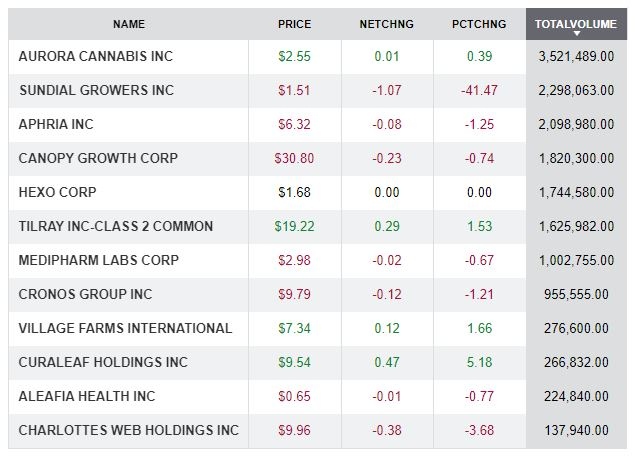